Mrs. O’Leary’s cow did not start the Great Chicago Fire 150 years ago

Over a century after the disastrous blaze an Irish milkmaid was proven innocent, a scapegoat in the blaze that killed 300 people. 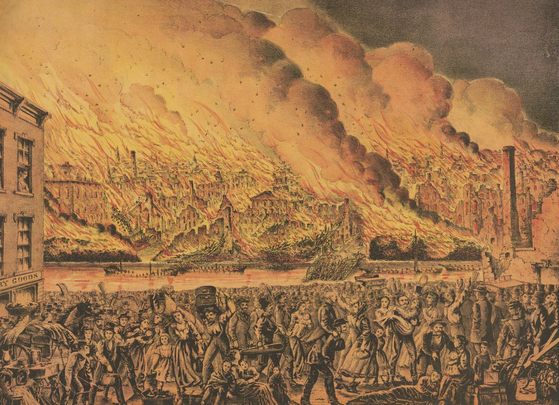 The Great fire at Chicago Oct. 9th 1871. View from the west side / Gibson & Co.'s Steam Press Library of Congress

For over a century O'Leary was vilified as the woman whose actions burnt down the Windy City, leaving 300 dead and 100,000 homeless. It was only 126 after the horrific incident that the truth came out.

Catherine O’Leary was an Irish emigrant born sometime in the 1820s. Until the fateful events of the night of Oct 8, 1871, her life had passed without note and without the events of that night, it’s likely not even her descendants would remember her today.

The Great Chicago Fire breaks out

Chicago at that time was still a new city. Founded a mere 30 years before it was believed to be the fastest-growing city in the entire world. Most of it had been constructed in haste - and poorly at that - almost everything was made of wood and tightly packed together.

The summer of 1871 had been a scorcher and with winter approaching most of the city’s barns were packed with fuel and animal feed. Strong winds were rattling through the city and at around 9pm, on Oct 8, 1871, Daniel “Pegleg” Sullivan spotted flames dancing up and down the O’Leary family’s barn.

It was to be 20 minutes before fire engines arrived and by then the flames had already engulfed the street. The strong winds were fanning the blaze towards the city center at an alarming speed.

As the Great Fire spread so the wind whipped it into a “fire whirl”, which is best described as a tornado of flames. The hopes of helpless residents that the Chicago River would act as a firebreak were cruelly dashed when the oil on the polluted waterway helped the flames to cross unhindered to the north side.

Prisoners were sprung from the local jail and the Mayor sent pleading messages to nearby towns begging them for urgent help.

Valiantly the city’s firefighters continued to battle the glutinous fire but it was not until the evening of Oct 9 that the wildfire began to die down. It was days before the burning cinders had cooled to ashes and only then could local officials begin to survey the damage.

In total, the fire had ripped through an area of the city four miles long and three-quarters of a mile deep, leaving only scorched black ashes in its wake. An estimated $222 million ($4 billion) worth of property had been destroyed.

Rumors and the Irish scapegoat

The heartbreak and the damage we're never going to deflect intrigue - even temporarily - as to who started the fire and no sooner had panicked Chicagoans been raised from their beds did rumors begin to swirl about the origin of the blaze and it was not long before the finger of blame was pointed at Catherine O’Leary.

O’Leary, it was alleged, had been milking her cow in the barn when the animal had kicked over a lantern engulfing the building in flames. Despite the distraught woman’s protests that she had been in bed the whole time the rumor was believed by many and the event was famously depicted in cartoons.

Have you heard the story of Catherine O’Leary? An #Irish emigrant, O’Leary was falsely blamed for starting The Great Chicago Fire after a rumour spread that her cow knocked over a lantern in her barn. Despite being proved false years later, the story became an American legend. pic.twitter.com/9LMSvDwoAI

The Irish emigrant was in many ways the perfect scapegoat. She was poor and Irish - a much-maligned social group at that time. So ingrained was anti-Irish prejudice at the time that many newspapers even reported that she had been passed out drunk when her barn caught fire.

Other theories are that “Pegleg” Sullivan caused the blaze himself and scapegoated the O’Learys to avoid being blamed himself.

In later years a local journalist admitted that the story had been fabricated and in 1942 a wealthy local businessman confessed on his deathbed that the fire had broken out when he and a few teenage friends had been playing cards in the O’Leary barn.

O’Leary died - “heartbroken” and unexonerated” - in 1895 but her descendants never gave up the fight to clear her name.

One-hundred-and-twenty-six years after the Great Fire of Chicago a number of O’Leary’s relatives - watched by curious journalists - gathered before the city’s Committee on Police and Fire to hear her officially cleared of all guilt.

Testifying alongside historians, her great-great-granddaughter Nancy Knight Connolly put across the family’s version of events that night. The panel concluded that the actions of “Pegleg” Sullivan should have been further examined.

"We always knew that she was innocent," a thrilled Nancy Knight Connolly enthused afterward. "But everybody else thought they did it. So now we'll be exonerated."

It was a case of justice delayed but ultimately not denied.

Here's a short PBS documentary on the myth of Mrs. O'Leary's cow: