The word leprechaun is synonymous with Ireland, but does it have ties to Ancient Rome. 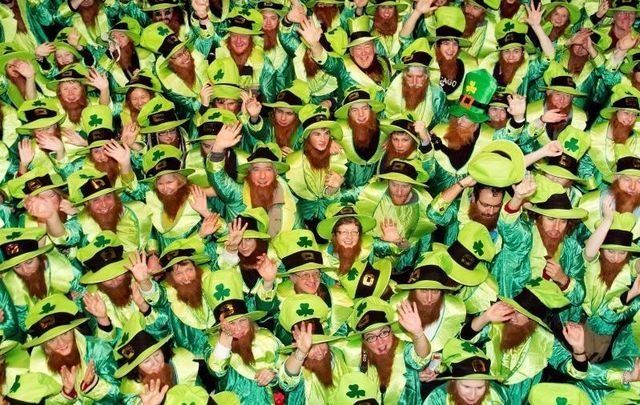 November 2011: People take part in an attempt to break the world record for Largest Gathering of People Dressed as Leprechauns in Dublin! Rolling News

A new study has uncovered evidence to suggest that the word "leprechaun" may have actually originated in Italy.

In 2019, researchers from Queen's University Belfast and Cambridge University in England found evidence that the term is not a native Irish one and that it could have originated in Ancient Rome.

The mythological creature is synonymous with Ireland and Irish folklore and the word 'leipreachán' has been in the Irish language for countless generations, but the researchers claim that the word comes from Lupercus - the Roman God in charge of protecting flocks.

The word has ties to luperci, a group linked to a Roman festival that included a purification ritual involving swimming.

Leprechauns were linked to swimming and water in The Adventure of Fergus son of Léti - one of their earliest appearances in Irish literature - when the leprechauns in the story carried the sleeping Fergus out to sea.

The research team from Queen's and Cambridge spent more than five years researching old Irish manuscripts and texts to produce an updated Dictionary of the Irish Language.

All told, the painstaking research added more than 500 new words to the dictionary and added more than 5,000 revisions to the original version, while the researchers found that the words originated in a one-thousand-year period, spanning between 600 and 1600 AD.

Speaking in 2019, Máire Ní Mhaonaigh, a professor of Celtic and Medieval Studies at Cambridge who took part in the study, said that the dictionary would help scholars to understand the Irish language.

"The Dictionary offers a window onto a fascinating and important past world. The project extends our understanding of the vocabulary of the time but also offers unique insights into the people who used these words. They reveal extraordinary details about everyday lives, activities, beliefs, and relationships, as well as contact with speakers of other languages," she said.