How the Irish were woken every morning before alarm clocks

Did you ever wonder who the hard-working folks of Ireland managed to get up on time before the invention of the alarm clock? The solution was ingenious... if a little odd. 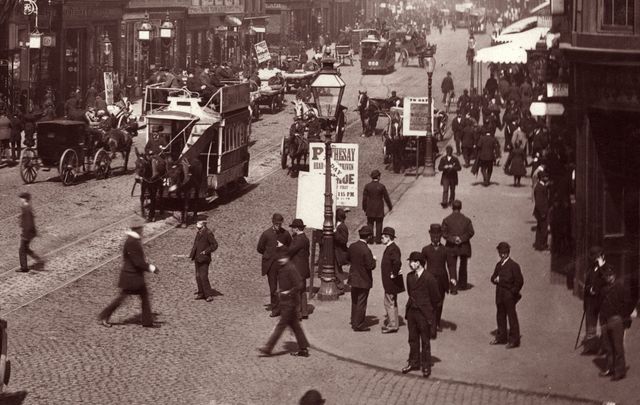 It wasn't until the beginning of the 1920s that alarm clocks became readily available, in any kind of reliable form, so how was it that the hard-working people of Ireland and Britain managed to get up in time for work every morning?

The answer is the knocker-upper!

The knocker-up went door to door, literally using a baton or short, heavy stick to knock on their client's doors or using a long stick, often made of bamboo, would tap on the higher windows of the houses.

At least one knocker-upper, a woman called Mary Smith, used a pea-shooter (see below!) The knocker-up would not leave the house until their client was roused.

Did you find it difficult to wake up this morning? Alarm not working as it should? Then you needs yourself a Knocker-Upper. Here's a photo of Mary Smith who earned sixpence a week shooting dried peas at sleeping workers windows. A Knocker-up (sometimes known as a knocker-upper) was a profession in England and Ireland that started during and lasted well into the Industrial Revolution and at least as late as the 1920s, before alarm clocks were affordable or reliable. The knocker-up used a truncheon or short, heavy stick to knock on the clients’ doors or a long and light stick, often made of bamboo, to reach windows on higher floors. Some of them used pea-shooters.

In the larger industrial cities, such as London and Manchester, there were large numbers of people employed to carry out this role.

Generally, the job was carried out by older men and women but sometimes police constables would supplement their pay by multi-tasking during their morning patrols.

Alternatively, larger factories and mills would employ their own knocker-up to ensure employees made it to work on time.

A “knocker-up” waking up clients, circa late 1800’s. A knocker-up, also referred to as a knocker-upper, was a profession in Britain and Ireland. This profession lasted well into the Industrial Revolution, when alarm clocks were neither cheap nor reliable, and to as late as the beginning of the 1920s. A knocker-up's job was to rouse sleeping people so they could get to work on time. #knockerup #knockerupper #profession #1800s #1800sfashion #weirdjobs #strangejobs #wakeup #alarmclock #alarm #humanalarmclock #history #facts #oldthingsandsuch #historicalphotooftheday #photo #photooftheday

Although the clock was certainly the main replacement from the 1920s the BBC reports that until the 1950s and even '70s the knocker-upper's work continued in part of Britain.

Next time your alarm clock goes off spare a thought for the knocker-uppers and think of how far technology has come!