“Get over it” – Famine caused by potato blight not the English. 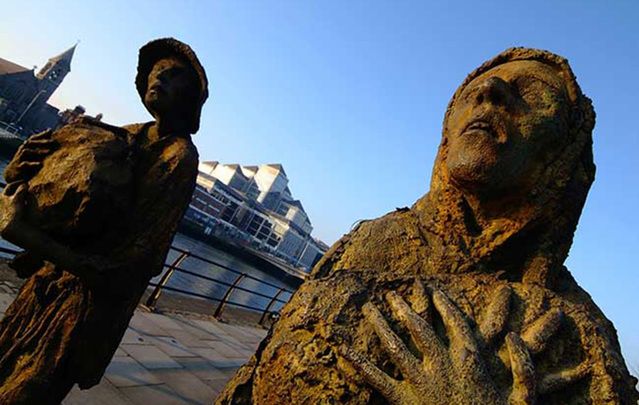 A leading Irish academic, Liam Kennedy, and top journalist Ruth Dudley Edwards have both declared the Great Famine was not genocide.

Writing in the Sunday Independent, Dudley Edwards stated: “What caused the Famine was the potato blight, not the English government. Get over it.”

“We're still bedeviled by myths that distort our island story. And because of the vicious propaganda of people like the Young Irelander John Mitchel, we have a particularly skewed view of the Great Famine. ‘The Almighty indeed sent the potato blight,’ he wrote, ‘but ... a million and half men, women and children were carefully, prudently and peacefully slain by the English government.’”

Dudley Edwards says that at 2015’s National Famine Commemoration, held in Northern Ireland, it was clear “that it was your social status, not your religion or ethnicity, that determined your fate in Ireland in the second half of the 1840s.”

Speaking at the last session of the conference, Dudley Edwards stated that a third of the audience believed the Famine was genocide. Tim Pat Coogan, also on the panel, said that those who disagreed were “holocaust deniers.”

“And historians who suggest otherwise suffer from ‘colonial cringe’ brought on by their indoctrination in English universities,” Dudley Edwards writes.

“Professor Liam Kennedy of Queen's, the distinguished economic historian, is among the damned. He has written a vast amount on the Famine, but Coogan is not taken in by it. Did he not spend time at the University of York? He and Coogan had a not-to-be-missed radio punch-up on the subject some time ago (you can still find it on YouTube).

“Coogan pointed out Kennedy's colonial cringing and Kennedy accused him of peddling 'junk' (or 'hamburger', as Coogan misremembered in Newry) history to Irish America.”

In his upcoming book, ‘Unhappy the Land: the Most Oppressed People Ever, the Irish?,’ Liam Kennedy’s essay comparing the Famine to the Jewish Holocaust points out that five years of blight made it the longest-running famine in modern European history.

Dudley Edwards writes: “In support of his thesis, Coogan had quoted from the 1948 UN Convention on Genocide, where the term is defined as killing, causing serious bodily or mental harm, and so on ‘in whole or in part, to a national, ethnical, racial or religious group’. Kennedy pointed out that he had omitted the qualification that to be genocide, it had to be intentional.

“So here's the simple truth. The British government handled the catastrophe incompetently, and for doctrinaire but not ill-intentioned reasons changed policy to non-interference after two years, but there was no deliberate cruelty and no intention to kill anyone.

“In these days of sophisticated infrastructure and brilliant communications, western democracies still fail to save hungry or endangered people in many parts of the world, but that is not because we want them dead. It's because we are incapable of dealing with most catastrophes.

“We're a grown-up country now. As Professor Kennedy shows in his book, we had many problems along the way, but we definitely have no claim to have been the most oppressed people ever.