Mayoman didn’t think much of the incident until the following year when he switched on the TV. 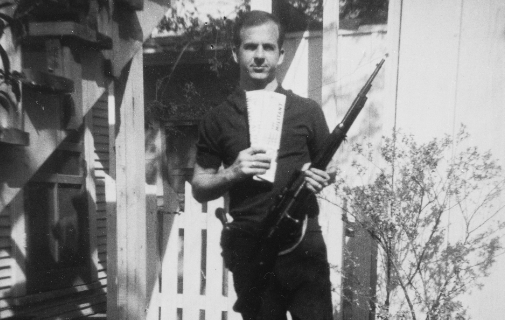 An Irish cop arrested Lee Harvey Oswald in Illinois for being drunk and disorderly on a Greyhound bus a year before Oswald shot JFK.

Historians now know the future killer was also in possession of a firearm after trawling through FBI files on the assassination released this month.

Mayoman Bill Filan arrested Oswald and took him to a Chicago police station where he confiscated his gun and locked up Oswald until the assassin-to-be had sobered up.

The following day, no longer intoxicated, Oswald was given his gun, sternly reprimanded and told to clear off.

Filan didn’t think much of the incident until the following year when he switched on the TV to find the “obnoxious drunk” he’d arrested was now suspected of killing the president.

“I thought, that’s the dirty dog I arrested down at the bus depot that time on the Greyhound bus,” he later told his great nephew Enda Mullen.

“I’d recognize him anywhere. I could have told the captain about the arrest but I didn’t. I just kept it to myself but I never forgot it.”

Filan was born close to the town of Swinford, in Co Mayo along the Sligo border in 1908 and emigrated to Chicago in 1929. After the death of his wife, Catherine, he moved to Phoenix, Arizona where he died at the grand old age of 93 in 2001.

Historians have been sifting through the JFK assassination files since they were released last month by the White House. Experts warned the public it could take a while before anything of note would be found but are slowly working their way through them.

IrishCentral promise to bring you the most fascinating details as soon as we hear them!