The Limerick burial site dates back to between 7,530 BC and 7,320 BC and contained the oldest polished ax in Europe. 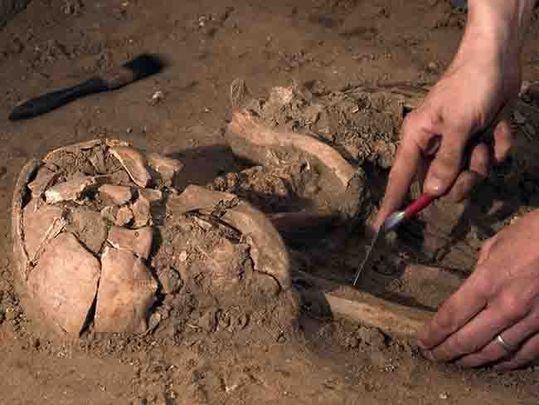 A burial site on the banks of the River Shannon in Limerick that is twice as old as the passage tomb at Newgrange contains secrets of Ireland's prehistoric past.

Situated on the banks of the Shannon in Hermitage, County Limerick, the burial site dates back to between 7,530 BC and 7,320 BC and contains burial pits that once held the remains of individuals who had been cremated.

The site was first discovered in 2001 and archaeologists have since conducted tests on artifacts that were found at the site in an attempt to learn more about the funeral practices of Ireland's mesolithic hunter-gatherers.

In 2016, archaeologists analyzed a polished ax recovered from the site and concluded that the ax was made especially for the funeral of a very important person.

Known as an adze, the highly polished ceremonial stone ax is the oldest polished ax in Europe.

Researchers found that the ax was little used, suggesting that it was "commissioned for the deceased and employed in their funerary rites", while research additionally indicated that it was deliberately blunted as a symbolic act.

Aimée Little, an archaeologist at the University of York in the United Kingdom who led the research study in 2016, told Live Science that the discovery offered an insight into the burial practices of ancient Ireland.

"This type of insight into burial practices is incredibly rare for this part of the world," Little told Live Science in 2016. "Nine thousand years ago, people in Ireland were making very high-quality artifacts specifically to be placed in graves."

Little told the Irish Times that the discovery contradicted the assumption that people living in Ireland during the Mesolithic period were "just hunter-gatherers roaming around the island, chipping away at bits of stone".

"You have really, very complex behavior at play here, in terms of the making and treatment of the adze as part of the funerary rights," she told the Irish Times.

"We make the argument it was probably commissioned for the burial and was probably used as part of the funerary rights, possibly to cut the wood for the pyre for the cremation, or to cut the tree used as the grave post marker."

Little also said that there was evidence of at least three cremations at the site stretched out over a number of years, indicating that the site was a place of cultural significance in pre-historic Ireland that people returned to for more than 100 years.

Ben Elliott, the co-author of the study, said that ceremonial axes like the adze found in County Limerick are primarily associated with the arrival of agriculture in Europe 3,000 years after the tomb was built.

"Although polished axes and adzes are known from pre-agricultural sites in Ireland and other parts of Europe, to find such a well-made, highly polished and securely dated example is unprecedented for this period of prehistory," Elliott told Live Science.

The study was first published in October 2016 in the Cambridge Archaeological Journal.