The clips filmed by an American news crew traveling through Ireland in the 1920s are now being updated using advanced color technology. 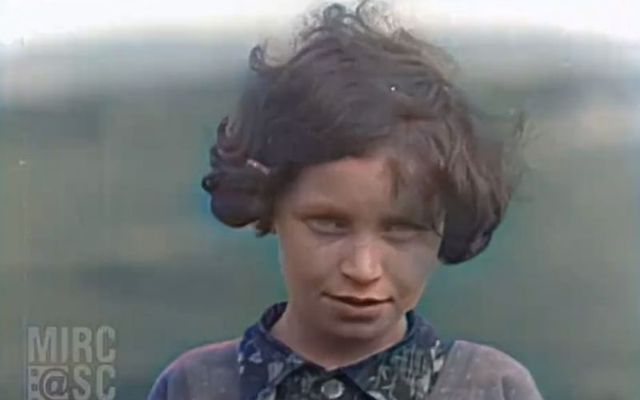 Old Irish footage filmed by an American news crew a hundred years ago is being colorized for the first time and is incredible to look at.

The archive black and white clips, filmed by an American news crew traveling through Ireland in the 1920s, gives a glimpse into Ireland's past.

The rare footage, now stored in a library collection at the University of South Carolina, gives an insight into the lives of Irish people at the time from cutting the turf to riding horses and carts in the small towns.

After gaining permission from the university, John Breslin, author of the best-seller "Old Ireland in Colour", has taken on the task of updating the videos using advanced color technology.

One clip from the collection is of then ten-year-old Katie Laden from Liscannor, County Clare reciting a nursery rhyme to the camera. The incredible footage shows a shy Katie saying her piece before breaking into a big smile at the end of the clip.

Speaking to RTÉ News, Katie's daughter Denise said that seeing the colored footage of her mother as a child was a special moment, "we are so proud of it... it means the absolute world to us."

But she added jokingly that her mother wasn't very impressed with the American camera crew. "My mother said to me that she had great poems learned off by heart but instead they told me to recite 'rock a bye baby' to the camera."

Another piece of footage shows a man called Pádraig Ó Maoláin, who is blind, seannós dancing while someone off-camera plays a reel on a melodeon.

Some damhsa ar an sean-nós from Árainn in 1929 to get you going today! 👞

Speaking about the feedback he's received since starting the project John said, "The reaction has been amazing and the clips themselves are fascinating and so natural."

You can view other archived Irish footage available at the University of South Carolina here.