Germany had eyed Ireland as a convenient launch point to threaten Britain. 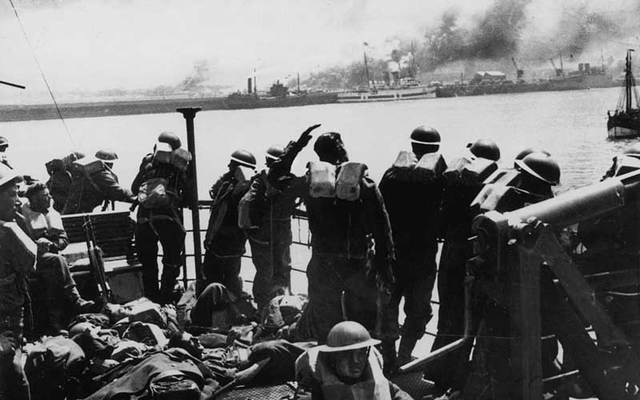 British troops looking back at the French coast from the deck of a steamer on the return to England after the evacuation of Dunkirk, June 1940. Keystone/Hulton Archive/Getty Images

Excerpted from "Echoes of Their Footsteps Volume III" by Kathleen Hegarty Thorne and Patrick Flanagan.

During late springtime eighty years ago the evacuation at Dunkirk took place. British troops were hanging on to a toehold on the continent. The Germans had driven them to the shores of the English Channel, but had paused to make repairs and take stock. During the lull, the English government put out an all-call to anyone on the southern coast with any sort of floating device to come to the rescue of the trapped men. The bravery and grit of the fishermen and ordinary civilians who succeeded in rescuing more than 300,000 soldiers is legendary. But why include this piece of continental war history in the Irish chronicles? Because the aftermath had repercussions for Ireland.

Germany had plans for an invasion. Specific details about landing sites and number of infantry divisions, as well as estimated dates of capitulation, had recently come to light. With or without the help of the IRA, Germany had eyed Ireland as a convenient launch point to threaten Britain.

Code named Operation Green, the plan was overseen by Field Marshall Fedor von Bock, a veteran of the Blitzkrieg technique. He put General Leonhard Kaupisch in charge of the operation, with the 4th and 7th German Army Corps, which had a combined strength of 50,000 men, allocated for the task. An initial shock force of about 4,000, complete with engineers, motorized infantry, and commando and Panzer units, was to land on the southeast coast, where beachheads would be established between Dungarvan and Wexford town. The second phase of the invasion was scheduled to start within twenty-four hours, with probing attacks on the Irish army based in Cork and Clonmel, followed by movement toward the Army’s Curragh Camp situated in Co. Kildare. Ideally, German boots would be marching into Dublin within forty-eight hours.

The overall plan, which stretched for seventy-eight pages, also noted infrastructure, rail lines, power grids, airfields, factories, gasworks, canals, etc., on both sides of the Border. Landing sites in County Kerry were mentioned because of their sheltered harbors.

Supply lines to Ireland would have been impossible to maintain with the British navy close in the wake of suspicious ships; consequently, German soldiers would have had to rely on the civilian population to feed and house them along their victorious march.

If such a plan had been implemented, the Irish military forces would have been overwhelmed and squashed. In May 1940 the Irish army numbered 6,000, augmented by 11,000 poorly armed volunteers and reserves in the Local Defence Force. They would have been no match for the German military machine.

Churchill became aware of Operation Green and devised a plan of his own to counterattack from Northern Ireland. The remnants of the Irish army, supplemented by volunteers from the Six Counties, would amass on the Cavan/Monaghan border and push south.

The success of the RAF’s Spitfires, which had valiantly challenged Goering’s Junkers for control of the skies above the English Channel during the Battle of Britain in summer 1940, changed Hitler’s plans. Without air supremacy, his forces couldn’t risk an invasion of England. And without a viable chance of landing on English shores and conquering the land, occupying Ireland seemed a waste of manpower and resources.

This continental war had a direct effect on the fate of the IRA. It was no accident that the plan emanating from Germany to invade Ireland, which had become known to Churchill, was also conveyed to de Valera’s government. And to waylay any collusion between the IRA and the Nazis, the Free State government began mass roundups in June 1940 and didn’t release men from prison or the Curragh for years, some not until the war had ended with the fall of Berlin.