Historians discover 20 people died when the shipwreck, known as the "Butter Boat", was swept out to sea. 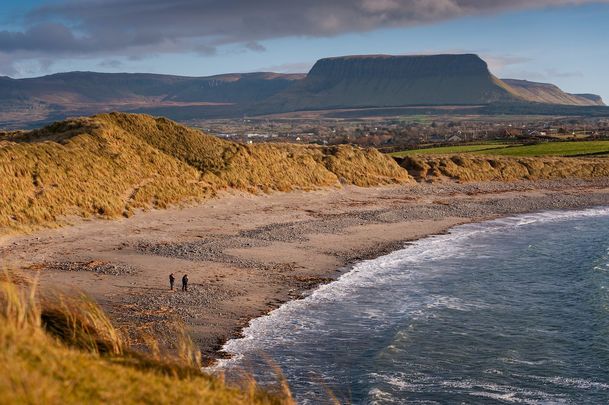 Researchers have traced the Streedagh Strand wreckage back to 18th century England and a December tragedy 250 years ago.

Researchers at Ireland's National Monuments Service used scientific analysis and historic archives to discover the story behind the Streedagh Strand shipwreck, in County Sligo, known to locals as the "Butter Boat".  The sad reality is that 20 people died after this ship got into difficulty during stormy weather on Dec 12, 1770.

The skeletal remains of a wooden wreck on Streedagh Strand in County Sligo are regularly revealed when the sands shift and it is a well-known landmark for the many locals and tourists who visit the popular beach.

Until recently, some thought that the ship was part of the fabled Spanish Armada. However. National Monuments Service revealed that the Butter Boat dates back to the 18th century, Yorkshire, England. It was actually called the Greyhound and was a coastal trading ship, which traveled regularly between Ireland and England.

The story of its fate is one of tragedy, with the loss of 20 lives, but also a story of great heroism, bravery, and selflessness.

During a storm that December, unable to seek safe harbor in Broadhaven Bay due to the poor weather, the Greyhound was driven to anchor in a perilous position beneath the towering cliffs off Erris Head, in County Mayo. The crew was forced to abandon ship and, in a tragic oversight, a cabin boy was left on board.

On learning of the plight of the cabin boy, local volunteers from Broadhaven Bay, together with the crew of a passing ship from Galway and some of the original crew of the Greyhound showed extraordinary bravery in an attempt to rescue the boy and the stricken ship. While the rescue team did manage to board the Greyhound and move the vessel away from the cliffs, the Greyhound was driven further out to sea by the force of the storm with some of the volunteer crew still on board, including the cabin boy, and later that night she was wrecked at Streedagh Strand, 100km to the east, with the loss of 20 lives.

Minister of State for Heritage at the Department of Housing, Local Government and Heritage, Malcolm Noonan, welcomed the uncovering of the full and tragic story of the Greyhound and the events that led to its loss 250 years ago.

He said “I know there is a huge amount of local interest in this wreck and that its identity has been a topic of debate for many years, with many calling it the Butter Boat and others thinking it part of the Armada.

"I am very pleased that through archaeological investigation, scientific analysis, and historical archival research our National Monuments Service has been able to finally confirm the wreck's identity and the events of 12 December, 250 years ago."

Low tide at Streegadh beach in this unseasonably mild December and the remains of (correct me if I’m wrong, ppl of Twitter 😉) the butter boat #mysligo pic.twitter.com/ZY1LMOc4MD

Minister Noonan added that the use of scientific data and local stories passed down through generations, bore fruit “In particular I am struck by the value of folklore archives along with applied archaeological research in uncovering the full and tragic story of the Greyhound and those caught up in the tragedy. Its calamitous story illustrates starkly the perils of the sea but also highlights, how in times of trouble, the common bond of the sea brings people from different backgrounds together in an attempt to save lives.

At a ceremony on Streedagh Strand on Saturday, Dec 12, locals, including religious leaders in the area, and members of the National Monuments team that solved the mystery paid tribute to those lost at sea, and laid a wreath on the wreck, remembering its known dead for the first time on what was its exact 250th anniversary.