Hibernians celebrate the life and legacy of Commodore Barry, Irish founder of US Navy

“He was born in Ireland, but America was the object of his devotion and the theater of his usefulness.” 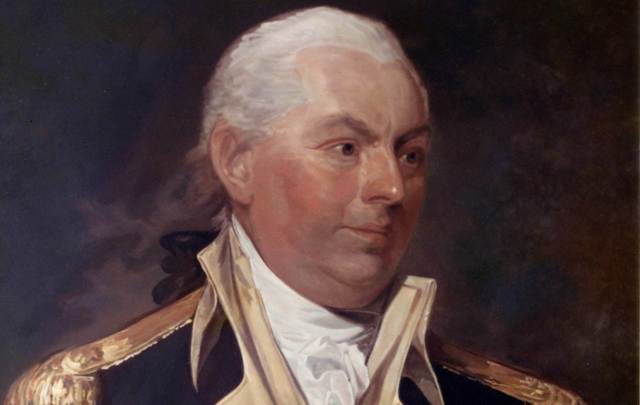 Portrait of Commodore John Barry, US Navy, by V. Zveg, 1972, from the 1801 portrait by Gilbert Stuart. Public Domain/WikiCommons

Did you know that the founder of the United States Navy was an Irishman?

The first flag officer and founder of the United States Navy was an Irishman named John Barry. Annually on September 13, Hibernians across the country gather with other Irish-Americans and Barry’s enthusiast to commemorate his life.

Dr. Benjamin Rush, a signer of the Declaration of Independence, said in his eulogy at Barry’s graveside, “He was born in Ireland, but America was the object of his devotion and the theater of his usefulness.”

Today, Ancient Order of Hibernians and all of Irish-America celebrate the life and legacy of American hero Commodore John Barry.

Born in County Wexford, Ireland in 1745, Barry is the holder of the first commission to the United States Navy under President George Washington. A holiday of the Order nationally for the Ancient Order of Hibernians, Commodore Barry Day was officially commemorated by President Ronald Regan in 1981. Regan said of the day, “a tribute to one of the earliest and greatest American Patriots, a man of great insight who perceived very early the need for American power on the sea.”

Throughout his life, Barry was also well regarded for his acts of charity, with generous support for the care of widows and orphans of sailors and as a leading member of the Friendly Sons of St. Patrick. At a time in America where Irish-Catholics were not held in high regard by the leaders of our country, Barry stood proud of his heritage, laying the foundation for the rise of Irish-Americans to political prominence in the United States in the generations following his death.

Despite a decorated record, Barry’s prominence has historically not been recognized to the extent one might expect for an early American hero. The Ancient Order of Hibernians has led education and awareness efforts for decades. Annually on September 13, Hibernians across the country gather with other Irish-Americans and Barry’s enthusiast to commemorate his life.

The rise of John Barry

As a young man, Barry immigrated to the colonies in America with a love for the sea and by 1760 he was employed by a shipbuilding firm in Philadelphia. In 1766, at the age of 21, he received his first commission as Captain of the ship, Barbados.

In 1775, years of smoldering unrest erupted in open rebellion as the American colonies declared their independence from the English.  As England prepared to regain control, the colonies formed the Second Continental Congress to establish a military force and defend their recently declared independence, but experienced men were hard to find.

Captain John Barry, an early champion of the patriot cause, promptly volunteered his service.  With nine years experience as a seagoing Captain and five successful commands to his credit, the young Irishman was warmly welcomed, and given command of a ship under the authority of the Continental Congress.  On Dec 7, 1775, Captain John Barry took the helm of a new 14-gun vessel aptly named, Lexington.

On April 7, 1776, he captured the British ship, Edward, and her cargo – the first American war prize.  On June 6, he was given command of the new cruiser, Effingham and captured two more British ships.  When Washington planned to cross the Delaware, Barry organized seamen and joined the land forces which crossed at one of the ferries owned by his Irish friend, Patrick Colvin of Co Cavan.

After the Delaware crossing and the subsequent victories at Trenton and Princeton, in which he served as an aide to Washington, Lord Howe made a flattering offer to Barry to desert the patriot cause. “Not the value or command of the whole British fleet” Barry replied, “can lure me from the cause of my country which is liberty and freedom.”

The last sea battle of the American Revolution took place in March 1783, as Barry was returning with gold from Havana and was set upon by three British ships.  The resourceful Captain engaged and destroyed one and outdistanced the other two, returning with the precious cargo which was used to establish a National Bank for the new nation.

On June 14, 1794, President Washington sent for the popular naval hero and charged him with forming and training a class of midshipmen who would then be commissioned as Ensigns and form the nucleus of the new United States Navy. Barry’s midshipmen Stephen Decatur, Richard Somers, and Richard Dale would go on to become American Naval heroes in their own right while carrying on the traditions of Barry.

Members of the Ancient Order of Hibernians and the Irish Brigade Association began to lobby for proper recognition for America’s early naval hero.  With support from the Naval Reserve Association, the Sons of the Revolution, the Naval Militia Association and Commodore Barry clubs, elected representatives were lobbied, leading to Congressman Peter King introducing a House resolution recognizing Barry on March 17, 2005, which successfully passed, and was signed into law by President George W. Bush.

Following these efforts, the Ancient Order of Hibernians then organized the erection of Barry Gate and Barry Plaza at the U.S. Naval Academy at Annapolis, which was commemorated in 2014.

The Ancient Order of Hibernians Presidents at all levels award the Commodore John Barry Medal to individuals who exemplify the principles of the AOH and the work ethic of Commodore Barry. National President James F. McKay award the first Barry medal on the National Level to Neil Cosgrove during the 2018 National Convention. Neil has served the National Board as Political Education Chairman, Irish American Heritage Month Chairman and Anti-Defamation Chairman.

When speaking of Barry, Neil said, “Commodore Barry is a pivotal figure in the history of the United States and emblematic of the contribution that generations of Irish American men and women have made to our Country.”

As Hibernians celebrate across the country with various memorials and events, they encourage all Americans to take time to reflect and celebrate the life of a great Irish-American.