In the early hours of Good Friday 1916, Ballykissane on the ring of Kerry bore witness to an automobile accident which resulted in the first deaths of the Easter Rising. 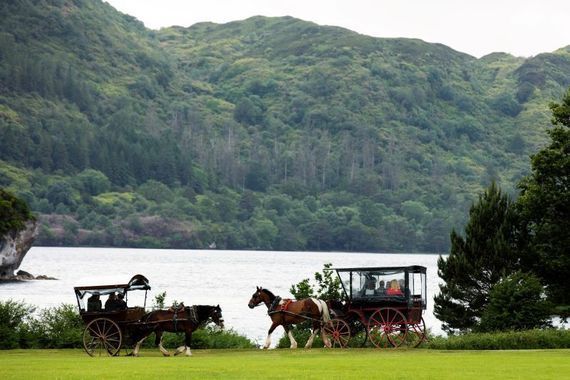 The Easter Rising is mostly associated with the city of Dublin. Various places across the city are forever linked to the week-long rebellion, but the first casualties of the uprising occurred far from the capital.

In the early hours of Good Friday 1916, Ballykissane on the ring of Kerry bore witness to an automobile accident which resulted in the first deaths of the Easter Rising - three days before rebels stormed the GPO in Dublin.

Five members of the Irish Volunteers were ordered to travel by train to Killarney from Dublin on a special mission. Three of them would never make the return journey - Con Keating, Donal Sheehan, and Charlie Monaghan.

Sean Mac Diarmada and Michael Collins held regular meetings with Keating, Sheehan, and Monaghan regarding a secret mission to Kerry. Also at these meetings were Colm O’Lochlainn and Denis Daly.

Keating from Renard, Cahirsiveen, had worked as a radio operator on ships. Sheehan from Newcastlewest knew admiralty codes through his work in the war office. East Belfast born Monaghan was a skilled wireless mechanic.

On arrival at Killarney train station, dusk was falling and the volunteers were picked up by two cars which came from Limerick. The volunteers who arrived from Dublin were to be driven to Cahirsiveen to carry out their mission.

The plan was to take control of Maurice Fitzgerald’s wireless school in Cahirsiveen and take equipment from there to a spot off the Castlemaine Tralee road. From there the volunteers were to send a fake signal to the British army regarding a bogus German attack off the Scottish coast. This plan was supposed to distract the royal navy away from the Kerry coast because the German u-boat The Aud was due to land at Banna Strand with arms for the Easter rebellion.

They were then to dismantle the radio and take it to Tralee where it was to be re-assembled. The aim was then to make contact with The Aud which was carrying 2,000 rifles and ten machine guns for the Irish rebels.

Keating, Sheehan, and Monaghan got into one car driven by Tom McInerney while Dennis Daly and Colm O’Lochlainn drove the car in front as they knew the route and were carrying the tools for the task. Both cars were said to have been the property of McInerney.

The night was pitch dark and the air stung with a cold bite. Traveling in such conditions was greatly hampered and through the rough and winding roads the second car lost sight of the first car and both were separated.

On the Killarney side of Killorglin, the first car stopped when it noticed the car behind had been separated. Daly and O’Lochlainn waited for some time at the side of the road for the other car but it never came.

The driver of the second car, McInerney, stopped at Killorglin to ask directions from a group of people. He was directed to turn right at a junction up ahead and follow the main road to Cahersiveen. Unfortunately under poor visibility due to the weather, the driver missed the turnoff at the junction and traveled straight towards Ballykissane pier.

The Briscoe American car which was carrying the volunteers went over the pier and into the River Laune. McInerney later told how under the moonlight, the reflection of the calm waters looked like a continuing road. The front two wheels of the car tipped over briefly and as the men tried to get out the car, it suddenly toppled over the pier and into the freezing waters.

Locals who were startled by the noise at the pier rushed to the scene to assist but of the four passengers in the car only one, McInerney, managed to get out of the River Laune alive.

Keating managed to swim for a while before the water overwhelmed him and he drowned. Sheehan and Monaghan went down with the car while McInerney miraculously swam two hundred yards ashore.

McInerney was brought back to the nearest house which was the dwelling of the O’Sullivan family, and there he was given dry clothes and a hot drink. McInerney was wearing heavy boots and an overcoat as well as a revolver when he swam for his life.

When the RIC arrived at the O’Sullivan house to question McInerney, some family members hid the gun under a cushion. McInerney told the constabulary that the three other men in the car were tourists whom he was tasked with driving around Kerry.

The following morning the bodies of Con Keating and Donal Sheehan were recovered. The body of Charlie Monaghan would not be recovered until six months later when it was found on an island on the river in October.

Wild rumors spread around the locality that the strangers who drove over the Ballykissane pier were bank robbers but by the following day, the truth was well known.

The authorities had strong suspicions about the so-called tourists and the day after the incident they came back to the O’Sullivan house to arrest McInerney. He was sent to Frongoch prison camp in Wales along with many of the rebels apprehended in the aftermath of the rising.

The Aud was expected to land arms on the Kerry coast by Easter Sunday when radio contact would be made between the German U-boat and the rebels. As it turned out, the mission would have been in vain due to the fact that The Aud had no radio to make contact and it was also being closely tracked by the British navy.

Charlie Monaghan and Donal Sheehan were both buried in Dromavally graveyard in Killorglin while Con Keating was laid to rest in his native Cahirsiveen.

At the scene of the accident at Ballykissane pier there now stands a monument to the memory of the first casualties of the Easter Rising.
* Originally published in April 2019.