The fishermen died 100 years ago, unaware that the "strange object" they found was a landmine. 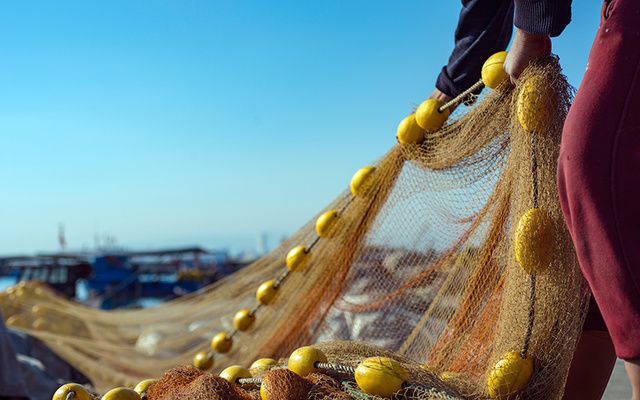 A fisherman pulling a net. iStock

Almost a century on, Connemara will commemorate nine fishermen who were killed after unknowingly towing a British landline ashore.

Nearly 100 years ago, several south Connemara fisherman spotted a “strange object’ floating in Galway Bay. Thinking it was something that would bring them good fortune, they opted to tow the  “barrel-shaped” device with “handles on each side” to shore, resting it in shallow waters until low tide, the Irish Times reports.

People gathered around the curious object, which one witness described as “black” and “like a big pot” with “spikes sticking out.”

On June 23, 1917, the Galway Express reported that the object was rolled along the sand and one of the fisherman “undid something”, and saw “a long thing coming out like the tube of a bicycle.”

The explosion could be heard over 15 miles away in Galway city. It also wrecked houses in the nearby townland of An Lochán Beag, and almost four miles east in the village of An Spidéal, the Royal Irish Constabulary (RIC) barrack windows were shattered.

Nine men aged between 17 and 53 were killed in the blast.

One man, Joseph “Joe Hughie” Flaherty, who was bleeding badly and would suffer for years with shrapnel in his spine, was able to stagger from the shore, while another man who had left the site to feed a horse is also considered a survivor of the explosion.

The newspaper, at the time, wrote a graphic account of the scene, saying there was “hardly a trace of bodies.” The paper described how the boot of one of the men was discovered a mile away.

► VIDEO: Nine fishermen who were killed by a sea mine in Connemara have been honoured 100 years after their death https://t.co/adHz5PgXsj pic.twitter.com/DdP2wMfffH

The next day an inquest was held in Thigh Mhaimí Costello – now An Poitín Stil – at An Lochán Beag, where authorities rushed to say the mine was of German origin.

The families of the deceased had no legal representation at the inquest.

“By stating that it was a German mine, there was no compensation available from the then British government, and a local collection raised a small amount of funds for the families,” says Pádraic Mac Diarmada, grandson of Éamonn Mac Diarmada, whose wife was left with eight children to raise alone.

Two of the men were buried locally in Cnoc cemetery in Indreabhán, the others were buried in the “paupers’ section” of the city cemetery at Bohermore.

The Irish Times reports that the mine was quickly removed from the scene, but one piece, found in the soil by a man digging potatoes, remains. Its number, 454, was recorded.

Six months after the blast that killed the nine men, another mine at sea near An Spidéal, destroyed the fishing vessel the Neptune. That incident too was said, without evidence, to have been caused by a German munition.

Members of the Cairde Chuimhneachán “An Mine” commemorative committee say that at the time of the explosion, Galway Bay was laced with British devices.

Brendán Ó Tuairisg, whose father was a juror at the inquest, said the coroner tried hard to establish this and even summoned a British navy officer to testify.

Fifty years later, a plaque, listing their names, was made to remember the nine men.

Over the years, access to the beach area became overgrown and flooded, and the tragic event was never discussed locally.

Today, the commemorative committee has worked to clear the shore and resurface the lane leading down to “An Mine” from the Cois Fharraige road, the Irish Times reports.

The plaque, which has been restored, will be reset in a boulder, which will have nine flagstones leading up to it.

The committee also hopes to mark the men’s grave in Bohermore cemetery, and a series of events have been planned June 15 -18 to mark the centenary.

Committee member Donncha Ó hÉallaithe says he has researched reports filed by the RIC on microfilm and has found no mention of the explosion in area documents for June and July 1917.

“Yet, curiously, in the RIC reports, there was mention of hurley matches at Na Forbacha several miles east,” he says.

“It suggests there was a deliberate policy to suppress the truth.”