Bones of children, aged seven to 12, have been found 170 years after they died on a 'coffin ship.' 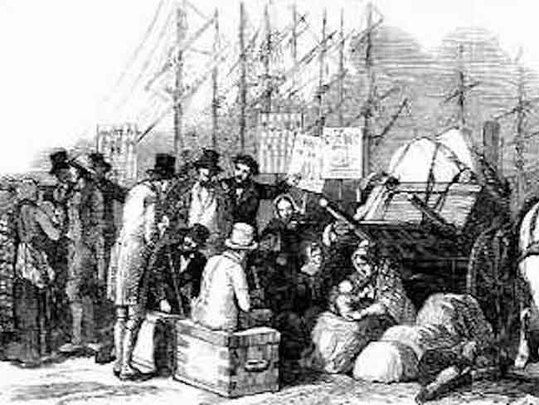 Irish ready to board a coffin ship: Bones of children, aged seven to 12, have been found 150 years after they died on a coffin ship.

Bones of Irish children, aged seven to 12, were found 170 years after they died on a 'coffin ship.' The vertebra and jaw bones were identified among remains, believed to be Irish children fleeing the Great Hunger, that were discovered in 2011 on Quebec’s Gaspé Peninsula, about 500 miles from Montreal, in Canada.

Following three years of research Parks Canada confirmed that the bones belong to children who had fled the Great Hunger in Ireland almost 170 years ago.

During the Great Hunger, one million Irish people died and another two million fled the country in search of salvation and a better life. Ireland’s population figures have still not recovered from this cataclysmic tragedy. Many of those two million who left Ireland traveled to America on “coffin ships,” which themselves were deadly. In fact, it’s thought that 100,000 Irish died on those ships.

One of those ships, the Carricks, set sail from Ireland to Quebec City, in 1847. The ship went down off the peninsula and 87 people lost their lives. Their tales was told by the 100 survivors. In 1890 a monument was erected in their honor.

Over 100 years after the monument was built these skeletal remains were discovered 40 yards away. However, without DNA evidence and carbon dating they can not be sure if the victims traveled aboard the Carricks.

What they do know is that the bones are those of children – two of them between seven and nine years old and another as old as 12. They showed evidence of rickets, a vitamin D deficiency, and malnourishment.

Toupin said, “In archaeology, we are there to protect memory...and give people an identity and say who they were.

“We can’t always reach absolute conclusions, but it’s always our goal to go as far as possible in identifying people.”

Pierre Cloutier, an archaeologist at Parks Canada, told the Toronto Globe and Mail, “They are witnesses to a tragic event. You can’t have a more tangible witness to tragedy than human remains.”

Georges Kavanagh, a resident of Gaspé, can trace his ancestors back to the victims and survivors of the shipwreck. He plans to ensure they get a proper reburial.

He said, “I have a link to these people – I almost consider them my family. Who wouldn’t want their ancestors to get a peaceful rest?”