Predator hunted in the ancient seas off Clare, when Ireland was located 10 degrees south of the equator. 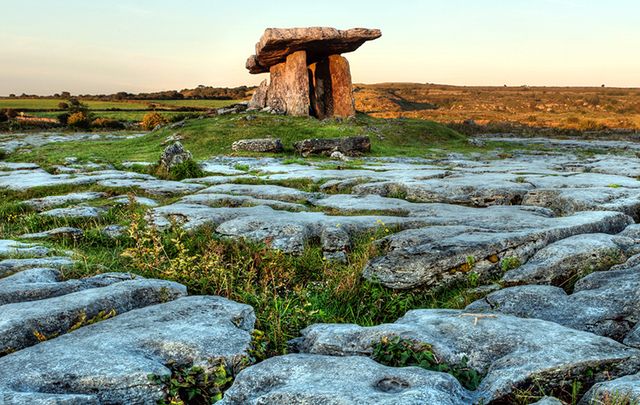 A geologist with the Burren & Cliffs of Moher UNESCO Global Geopark has discovered a 320-million-year-old shark tooth fossil on the north Clare coastline at Doolin.

Dr. Eamon Doyle made the discovery of the tooth belonging to a shark that once hunted in the ancient seas of the Carboniferous period (that’s 358.9 million years ago) in the waters off Ireland at a time when Ireland was located close to the equator.

“Fossil sharks teeth of this age are very rare in Ireland and so it extends the known range of fossil sharks in Ireland,” said Doyle.

Previously Doyle had told IrishCentral “The underlying geology of the Burren holds many fascinating clues to conditions on Earth more than 300 million years ago. The oldest rocks visible on the Burren’s surface were formed during the Carboniferous period, approximately 299-359 million years ago. These limestone rocks formed in shallow, warm, tropical seas 10 degrees south of the equator. More recently, the last ice Age has sculpted those rocks and largely given the Burren its current shape. Research is active and scientists and students come from all over the world to see what we have here.”

Speaking about his most recent discovery, Doyle said what is “equally significant is the information it gives us about the biodiversity of these ancient seas. This shark tooth tells us that apex predators of up to 70cm were living here at the time. It is possible they were feeding on creatures known as nautiloids which are spiral-shelled creatures which grew to about 10cm where the tooth was found. These nautiloids were also predators and prior to this find would have been regarded as the apex predator. It is hoped that further finds will add more information.”

The 320-million-year-old shark tooth fossil discovered on the north Clare coastline at Doolin.

The fossil will be placed on public display on Thursday 25th May at an event, entitled There’s Life in the Old Rocks of Clare, in Ennistymon Public Library.

The event marks the start of the annual Burren Rocks program (Thursday 25 May – Monday 29 May 2017), which features a range of fun and educational events exploring how the history, culture, flora and fauna of the Burren have been shaped by the region’s geology.

Video: Unearthly footage of the Burren

Other events being held during the week include a bird call identification walk with staff of the Burren National Park, a guided walk through time with Geopark geologist and National Park Staff guides, a Bug hunt for children and a National Schools Burren Quiz.

On Monday 28th May meanwhile, archaeologists and students of NUI Galway’s Irish Fieldschool of Prehistoric Archaeology will turn the sod on a new excavation at Parkabinnia wedge tomb in the Burren, which is hoped will provide a better understanding of the burial rituals, beliefs and social structures of Ireland.

"This annual festival explores the underlying geology of the Burren and how it holds many fascinating clues to conditions on Earth during the past 330 million years, including the end of the last Ice Age 15,000 years ago which gave the Burren its current shape,” stated Doyle.

He continued, “Academic research throughout the Geopark is active and scientists and students come from all over the world to see what we have here. Our activities are designed to give people a taste of the geology and how it affects the landscape and also the culture of the Burren.

The Burren Rocks is part of European Geoparks Network Week - a week-long celebration across the 64 Geoparks spread across 22 European countries - and is supported by Clare County Council, the Burren National Park, Burren Outdoor Education Centre, Clare Local Development Company (CLDC) and the Geological Survey of Ireland (GSI).  Burren & Cliffs of Moher UNESCO Global Geopark is managed by Clare County Council and supported by the GSI. Visit www.burren.ie for further information.