The Royal Irish Academy is publishing six books on the excavation of Knowth passage tomb in County Meath online, for free. 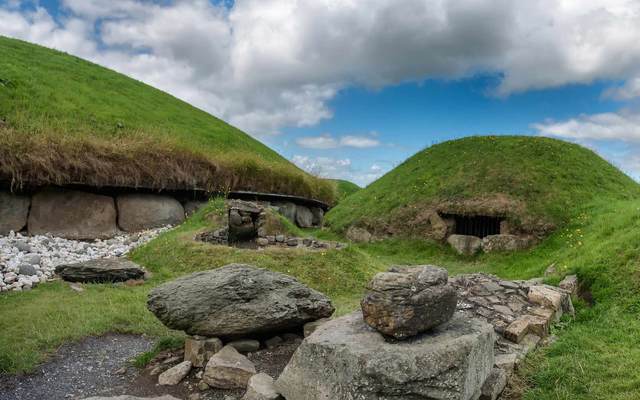 The Royal Irish Academy’s aim is to spark new research on Knowth and to help those researching the newly discovered sites in the UNESCO World Heritage site of Brú na Bóinne.

Knowth is the biggest of the passage tombs discovered so far - bigger than Newgrange - and boasts the largest collection of Neolithic art. It is older than the Egyptian pyramids and older than Stonehenge.

The Neolithic passage tombs at Knowth, County Meath, date to approximately 3,200BC. The site consists of one large tumulus (the Great Mound, which houses two large passage tombs) and 20 smaller satellite tombs. Overall, Knowth has had a history, though not continuous, of ritual and settlement spanning roughly six-thousand years—from the beginning of the Neolithic to the modern era.

Editor extraordinaire, Ms Helena King, talks us through a live demonstration of the #Knowth online digital archive. A fabulous new (and free to access) resource for all. @RIAdawson https://t.co/ljq4GzvdkV pic.twitter.com/Pa9ZiNp9SU

The Royal Irish Academy, launched in 2018, is in partnership with the Department of Culture, Heritage and the Gaeltacht. Commenting on the launch, Minister Josepha Madigan said:

“Our shared mission is to make our heritage accessible to all and it is fantastic that the results of these internationally important archaeological excavations at Knowth are being made freely available to researchers and to the public who share our fascination with the archaeological wonders of Brú na Bóinne.”

Part of the tomes released includes an account by the Director of the Knowth excavations George Eogan’s, his own account of finding the Eastern passage tomb:

‘30 July 1968, during…excavation…a small hole appeared along the main east–west baulk. The following day I entered this cavity’ ‘1 August…all four passages were explored…this confirmed…what appeared to be a longer, megalithic passage’ ‘the richness and abundance of megalithic art…occurred on almost every orthostat…even some of the roof corbels were decorated’  ‘Standing in a…virtually intact structure…built more than 5,000 years previously…the first person to enter in over 1,000 years—what a privilege!’

Irish passage tombs are widely recognized as outstanding architectural achievements, and the Great Mound at Knowth, which still dominates the landscape today, is a particularly fine example.

It is great to be here in the Bru na Boinne visitor centre to launch the online versions of the 6 vols of Excavations at Knowth which will be available on https://t.co/orW9FYPXqj via @dri_ireland and with thanks to partners @DeptAHG pic.twitter.com/4NiZDNa2IG

Those who built it constructed two passage tombs beneath it; each of which has a large burial chamber. The western passage tomb, which is approximately 34m long and ends in an undifferentiated chamber, was rediscovered on July 11, 1967.

Just over a year later, on August 1, 1968, an even more dramatic discovery was made: a second, larger tomb (its passage just over 40m long) lay back-to-back with the western one. This eastern passage tomb ended in a cruciform chamber with a magnificent corbelled roof. There was a carved stone basin containing cremated remains in the right-hand recess of the chamber.

The main tumulus at Knowth has been in state hands as a national monument since 1939. A modern program of archaeological excavation and associated research began in June 1962, directed by George Eogan.

As it progressed, that excavation program uncovered up to 20 smaller passage tombs in the vicinity of the Great Mound. In 1987, the Boyne Valley Archaeological Park was established, incorporating Knowth, Newgrange and Dowth; in 1993, the entire area was designated by UNESCO as the Brú na Bóinne World Heritage Site.

The Office of Public Works has overall responsibility for the site at Knowth, which is open to the public seven days a week from April to October. Access is managed via Brú na Bóinne interpretative visitor center, opened in 1997 near Donore, Co. Meath, on the south side of the River Boyne.

The books and other archive material that make up the collection being launched, including photographs, can be accessed at www.ria.ie.

The electronic resource is hosted by the Digital Repository of Ireland, a national digital repository for Ireland’s humanities, social sciences, and cultural heritage data. The launch was attended by over 100 people, many of whom were involved in the excavations at Knowth over the past 50 years.