George G. Klein was honored for his bravery at Normandy in 1994, but 73 years on he now reveals he was in Northern Ireland on D-Day. 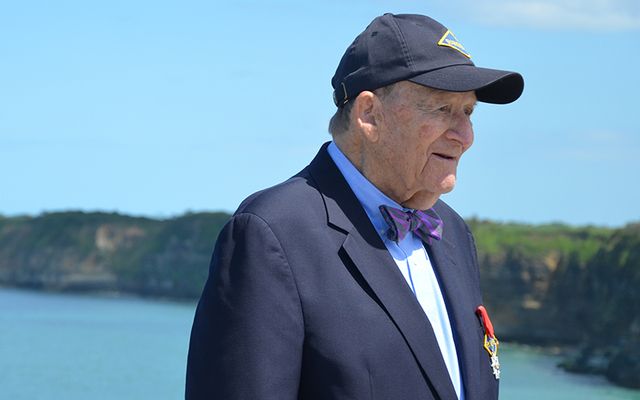 An American WII veteran decorated for his bravery in the D-Day assaults at Normandy has admitted that he was actually in Northern Ireland at the time.

George G. Klein, now 96, was honored with the Purple Heart and Bronze Star medals in the US and the Légion d'honneur in France for his crucial actions as one of the 2nd Ranger Battalion soldiers, securing the coast between Omaha and Utah beaches and aiding in the assault at Pointe du Hoc to quash the German artillery vantage points.

Just this year he flew to France with the aid of $4,000 in charitable donations from the Overlord D-Day association to participate in the 73rd anniversary ceremonies of D-Day, posing for photographs and signing autographs on the cliffs summited that fateful day. "I am not a hero," he said in his remarks, "the real heroes are those who lost their life here."

Read More: How a weather report from a Mayo lighthouse saved the D-Day invasion

However, his story attracted the attention of WWII historians Marty Morgan and Gary Sterne, who were unable to locate any record of Klein being at Pointe du Hoc.

Confronted, Klein acknowledged that during D-Day he was in fact in Northern Ireland with the 46th Field Artillery Battalion, 5th Infantry Division, recovering from a broken ankle. He would eventually journey to France in July 1944, a month after D-Day.

"George Klein arrived in Normandy in July 1944. I'm in contact with his family, with whom I have become friends. They are devastated," Marc Laurenceau, head of the Overlord D-Day association that funded Klein's trip told French newspaper La Renaissance Le Bessin.

"So are we, as we believed his story. We put in a lot of effort to get him to Normandy," he added.

However, the association also offered words of support to Klein. "Trapped in a lie that shaped him in the eyes of his entourage, and from which he could no longer escape, he finally resolved to tell the truth."

They said that his bravery and contribution still stood as he was wounded in action in Germany on November 17, 1944.