O’Leary, a man of courage, lived a life littered with examples of bravery and heroism. 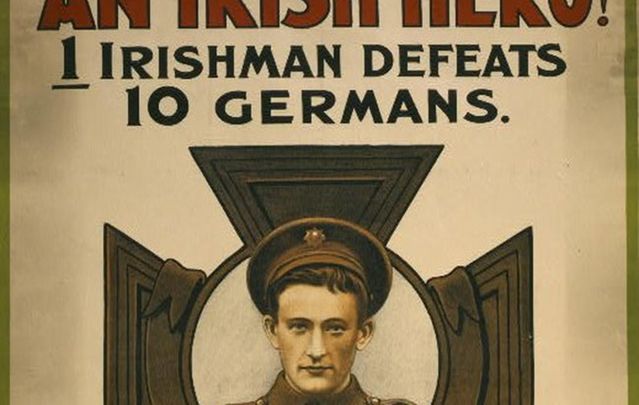 O’Leary, a man of courage, lived a life littered with examples of bravery and heroism. FindMyPast

Cork-born Michael O’Leary was a man of courage. He lived a life littered with examples of bravery and heroism. In Saskatchewan, 1913, as a member of the Canadian Royal Northwest Mounted Police, he was awarded a gold ring in recognition of his fortitude following a protracted shootout with two fugitives, both of whom he took alive.

His defining act, however, came during the First World War, where he became the first Irish Guard to be awarded the Victoria Cross, the highest honour that can be bestowed upon a soldier in the British Army.

The backdrop for O’Leary’s heroism was Cuinchy, a small, strategically vital village in Northern France that had been the scene of vicious attack and counterattack between British and German troops. After an irresistible German offensive drove British troops back in January 1915, the Irish Guards and the Coldstream Guards were deployed to play their part in regaining the lost ground.

On the morning of February 1 - a date that will live in infamy as the first example of British troops using chlorine gas in battle, with mixed effectiveness – the Germans attacked again, driving the Irish and Coldstream Guards even further back. At 10.15am, British soldiers counterattacked, however marshy ground and wicked machine gun fire hampered their progress, and they began to suffer heavy casualties.

Seeing the offensive beginning to stall, O’Leary ran ahead of his comrades, reaching a railway embankment that offered him better footing and overlooked a German machine gun position. O’Leary fired his rifle five times, killing all five members of the German gun crew.

O’Leary charged onwards to a second machine gun nest. The Germans tried to bring their gun to bear on O’Leary, however he didn’t give them enough time. He emptied his rifle of its final three rounds, killing three Germans. The remaining two German soldiers had no appetite for a fight against this Irishman possessed, and (without realising his rifle was empty) surrendered to him.

His conspicuous bravery in the face of German guns earned him the Victoria Cross and a life of celebrity – his return to England was celebrated by thousands of people in Hyde Park - meant that O’Leary was the perfect recruitment tool in the war against the Kaiser. A fitting tribute to a true Irish hero.