Rick Perry has been memorably described as 'Bush without the brains" but the Texas governor is already a formidable candidate for the republican nomination. 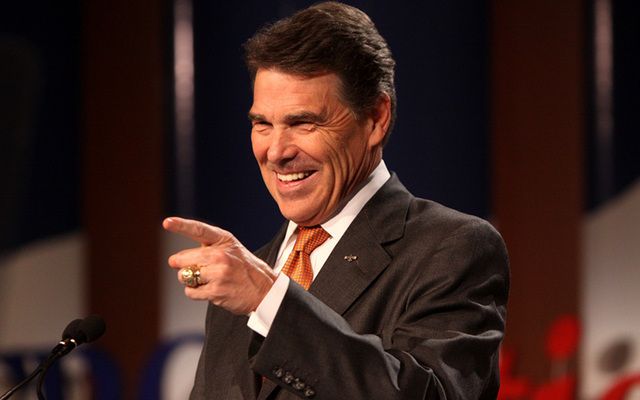 Rick Perry has been memorably described as 'Bush without the brains" but the Texas governor is already a formidable candidate for the republican nomination.

Though he has not announced, Perry, 61, is already joint favorite , with Mitt Romney to take the GOP nomination with Paddy Power the leading Irish bookmaker.

They are both around the 2/1 mark with Michele Bachmann next at 7/1.

That is despite the fact that Perry has not even announced yet.

So who is Perry, this typical Texas politician, cowboy boots and stetson hat and all?

Is he all hat and no cattle as some Texans believe?

Or is he a real contender who can take the race to Mitt Romney who has sat back these last four months and watched a succession of wannabees try and fail to displace him as front runner.

There was a brief Sarah Palin burst, then a lunatic Donald Trump boomlet, followed by a Michele Bachmann rumble, none of which really went anywhere.

Perry is more formidable than all of them put together however.

First of all Perry is not George Bush. He was born in very humble circumstances and never saw a silver spoon in his house, never mind in his mouth.

Indeed, he and Bush can hardly stand each other and one can expect his predecessor in Texas to stand firmly on the sidelines while Perry enters the race

He has also been a Democrat in his past life, in fact he was Texas Chairman for Al Gore's presidential race in 1988, a role that is sure to come back and haunt him as the election proceeds.

If there is one name that drives Republicans crazy it is 'Ozone Man' Gore as George Bush christened him. Perry's connection to Gore is bound to cause him major grief with GOP hardliners

Amazingly, he has taken Romney to task mainly on a recent global warming speech where Romney seemed to allow for the fact that it might exists.

That was more than enough for the Good Old Boy Rick to launch a major assault on Romney and the whole global warming nonsense as he now sees it.

No doubt pictures of Gore with Perry will soon be appearing on a website near you as Perry's opponents attempt to link him to the former Vice President.

Perry will have to admit he was singing a different tune back in 1988 however, when back then Al Gore was a strident opponent of carbon gases and bad environmental policies.

Perry will have to overcome that particular flip flop if he is to succeed.

He also has a religious problem, not in the sense that he has none but perhaps too much.

He recently appeared at massive faith rally attended by over 30,000 in Texas and essentially blurred the line between faith and politics is a way that made many commentators uneasy.

He is clearly doing what any outsider challenging for the Republican party nomination has to do -- running hard to the right while hoping that by the general election he can claw his way back to the center where American presidential elections are won.

But the Republican right is a hard place to run away from these days.

If he gets the nomination, the Tea Party has shown their clout and would abandon Perry in a second if he suddenly went soft and mushy.

There be monsters everywhere for Perry if he runs, but perhaps none more so than the shadow of his predecessor George Bush, now looked upon as a failed president, who, like Perry came out of Texas talking tough but delivering two endless wars and a broken economy.

Rick Perry will find it hardest of all to run from that.