Ireland’s national anthem, Amhrán na bhFiann, is a militaristic anachronism. Is it time to change it? 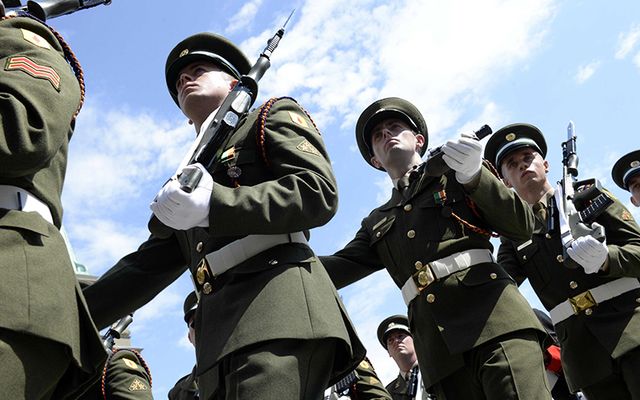 Does the Soldiers Song need to go? RollingNews

Ireland’s national anthem, Amhrán na bhFiann, is a militaristic anachronism. Is it time to change it?

Time has proved minister Frank McDermot right about one thing, the Irish national anthem, Amhrán na bhFiann (A Soldier’s Song) truly is “a jaunty little piece of vulgarity, and I think we could have done a lot better.”

First of all, the blatantly militaristic lyrics haven’t worn well over time. A Soldier’s Song was first used as a marching song by the Irish Volunteers and then later sung by the rebels during the 1916 Rising, but that was because it has much more to say about fighting for freedom than keeping the peace.

Times have changed in Ireland but these fighting words haven’t. Just take a look at the (abridged) lyrics here:

As round our blazing fires we throng,

The starry heavens o'er us;

Impatient for the coming fight…

The coming fight? In 1916 that was prophetic, but what kind of message do those words send in 2017? Are we talking about the Brexit negotiations and the resolution of the border issues? How does this batten down the hatches approach help us exactly?

The chorus of A Soldier’s Song really lays it out for you:

Whose lives are pledged to Ireland…

Sworn to be free,

No more our ancient sire land

Shall shelter the despot or the slave.

Tonight, we man the gap of danger

In Erin's cause, come woe or weal

We’re not soldiers. Our parent’s weren’t soldiers. Our grandparent’s generation were the soldiers and most of them were notably reluctant to re-live the horrors of the war of Independence and the Civil War after it ended. Cannon’s roar and rifle's peal my behind.

The historical violence of A Soldier’s Song is matched only by the injury it does to lyricism. Rhyming Ireland with sire land is an unspeakable impertinence. It’s the kind of clanging echo that would make Cole Porter rotate in his grave. Why does no one dare to say this?

It seems the message isn't really getting through to the Irish government at all.

A public consultation will soon be held by the Irish Senate on the anthem, with Fianna Fail's Seanad spokesperson on foreign affairs, Senator Mark Daly, acting as coordinator.

"The basis of this public consultation comes from the recent change to the copyright of both the music, and lyrics, in Irish and English, of Amhran na bhFiann,” he told the press.

That means he’s working to ensure that Ireland maintains the copyright. Does that sound like someone inviting a reconsideration of the actual song itself?

Things that are looking you square in the face are often the hardest things to see, experience teaches us. Our successive Irish governments like to manage controversy by running away from them as fast as their feet will carry them.

So taking a grown up look at our very problematic anthem will be a job for every day Irish citizens at home and abroad and it will only commence when we have the maturity to look at our anthem and ourselves dispassionately. What sort of message do we want to send the world now. When will we have the honesty to discuss it?