Until two weeks ago, I had no idea what it meant to make an Irish exit. Now I know that an Irish goodbye is the best way to leave a party. 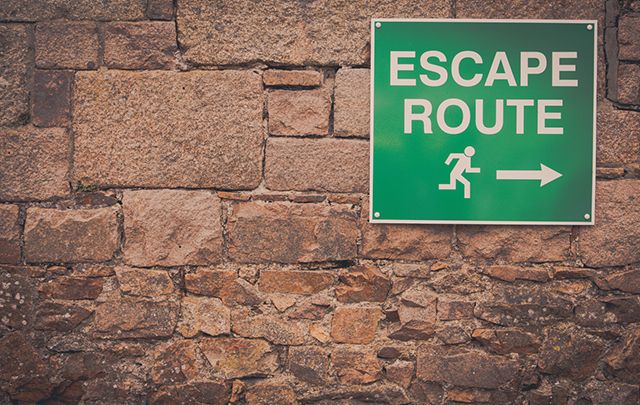 The Irish goodbye is the best way to make your escape. iStockphoto

What is an Irish exit/goodbye? Until two weeks ago, I had no idea. I had just finished watching the season seven premiere of 'Game of Thrones' with a new group of friends when the host of the party suddenly asked where two of our friends had gone. Everyone giggled and exclaimed that they had left. Then my new roommate shouted, “Well they are Irish!”

I quietly smiled and thought to myself, enviously, “wish I could do that!” But I was still confused about what exactly being Irish had to do with exiting quietly.

Being the person who must have an answer to everything, I looked it up.

I came across articles that filled me in on the meaning of the Irish goodbye. For those of you who are reading this and were clueless like me, it’s when you leave a social gathering without saying your farewells. Suddenly, I felt a lot better about my desire to secretly duck out of large parties. As it turned out, I had been Irish exiting for years but was unaware it had a name!

Onward to my main question.

Is the Irish exit rude? Or, like this Thrillist.com article says, is it actually a mark of high moral character? Allow me to outline why it's been helpful to me.

When I'm in a large group of people, and particularly ones I don't know well, I have a tendency to just want to sneak away. As an ENFP (the Extroverted, Intuitive, Feeling, Perceptive classification on the Myers-Briggs Personality Test), if I have had a night of stimulating and deep interactions with a group of people I know well, I like to say goodbye to everyone in the room and be the last one to leave. On the other hand, given that ENFP types are the most introverted of the extroverts (and I'm sure several introverts will relate) if I spend too much time with large groups of people I'm NOT close with, I get drained. Mainly while watching TV, movies, going to bars/clubs where it's loud, etc. If I don’t get to know you on a deeper level, all the small talk becomes absolutely exhausting. My strong dislike of trivial conversation is clearly a factor in this.

I’m aware this may sound strange to some, but I have always found goodbye hugs to feel fake. I loathe phony interactions and avoid them if at all possible. Often, they turn into an awkward dance with forced physical contact and/or people trying to convince you to stay longer at the gathering you’re trying gracefully to leave. Sometimes they even get upset that you are leaving in the first place. You end up making plans you don't intend on keeping. It's awful! If you would like a visual of how it feels in my mind, imagine a big red button going off that says "THE FUN CAPACITY HAS BEEN MET, TIME TO MAKE AN ESCAPE PLAN!”

A visual rendering of the writer's mind in the aforementioned situation. Photo: Kelly O'Connell

And so, the art of leaving a party without saying goodbye. Here’s how I suggest you try it, depending on the situation. With closer friends, if I feel I must, I will text the host to say “thank you” and explain that it was time to leave. If I don't know the host too well, I will tap them on the shoulder and briefly say goodbye as I brush past everyone else as seamlessly as I can, making my departure without interrupting anything. The ultimate goal is to exit quietly, disturbing absolutely nobody in the process.

Lastly, friends of 'Irish exiters,' please take note: if somebody you know does this, PLEASE do not make a big deal out of it. PLEASE don't draw attention to them. PLEASE do not scream at them mid-exit in front of the entire room demanding a goodbye. That’s embarrassing for all of us. Look, I’m sure they love you and are thankful for your hospitality. But they certainly don't want to deal with your pouty face potentially asking them to stay longer. Then everyone feels bad.

Accept that everyone is different, and let them go home and recharge. Accept that it may even be a sign of selfless social grace. The only reason they are doing it in the first place is because they don’t want to wait around and interrupt five or more different conversations just to get out the door. Plus, this way you’ll still have plenty more to talk about next time.

Corinne Davis (CØR!NNE) is a singer-songwriter, actress, and an artist. She attended Shenandoah Conservatory for Musical Theatre where she received her BFA. Currently, Corinne lives in Brooklyn, NY focusing heavily on Indie-Pop/ Synth-Pop music. You can follow her on her social media accounts @corinne_music or check out her website at www.corinnenicole.website. Her latest single ‘Bye Bad Boyfriend’ will be released soon on Spotify and Apple music.