Real ghosts and gangsters of the Eastern State Penitentiary 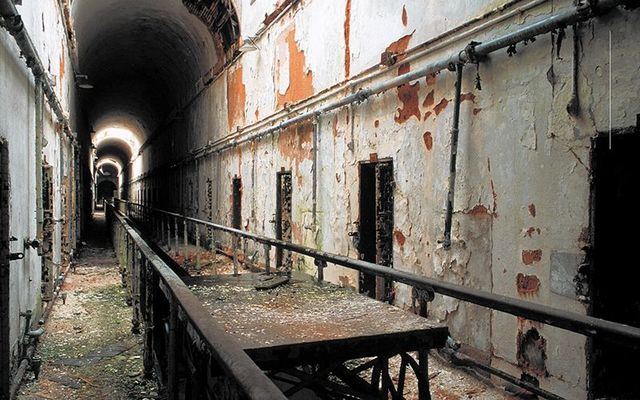 Inside the Eastern State Penitentiary.

“The quintessential Hannity program,” author Matthew Shaer notes, “tends to hinge on one or more of the host’s abiding preoccupations.” These include a “nostalgia for an America that Hannity feels is slipping away.”

Hannity is not the only one.  The entire Make America Great Again movement is built on the idea that some evil force is soiling our great nation, which was once a Garden of Eden.

This came to my mind last Thanksgiving weekend when we took a family trip to Philadelphia and stopped at the imposing structure running along Fairmount Street.  Eastern State Penitentiary (ESP) has been closed for decades and has been transformed into a fascinating museum.

In order to maximize the number of tourists (and they were arriving by the busload), ESP plays up its affiliation with Al Capone, the notorious gangster spent a few months there in 1929 on a gun charge, as well as the possibility that it might be haunted by ghosts.

For me, though, the real highlight of ESP was one of the many art installations at the site, this one entitled “Other Absences,” by Cindy Stockton Moore.  The exhibit features 50 stark portraits of murder victims, “men, women and children whose deaths were attributed to those incarcerated at Eastern State Penitentiary.”

Moore, who also lives in Philadelphia, offers us a poignant glimpse into lives -- many of them Irish American -- brutally cut short.

There’s policeman Thomas Dowling, shot by a 17-year-old during the course of a robbery.  There’s detective Joseph McGinn, killed during a raid breaking up an illegal gambling operation.

And, perhaps saddest of all, little Blakely Coughlin, just 13 months old, “accidentally smothered” by a fellow known as August “The Crank” Pasquale, during a kidnapping gone horribly wrong.

Lest we get high and mighty here, thinking our fellow Irish Americans always seem to be on the right side of the law, ESP offers plenty of evidence to the contrary.

How well regarded were the Irish in the Philly underworld at this time?  When a child of Polish immigrants who would also go on to serve time at ESP wanted to make a name for himself in gangster circles, what name did he adopt?  Mickey Duffy, so he could fit in with all of the other Irish criminals.

Yes, these certainly were good old days, Mr. Hannity.  Today’s immigrants really are ruining an America that was once so peaceful and orderly, aren’t they Mr. Trump?

A Mexican who illegally stays in America to sling pizza for 10 bucks an hour is a threat to Western Civilization.  Yet Capone -- responsible for dozens of deaths, his wife the proud daughter of Irish immigrants -- is a top seller on t-shirts in ESP’s gift shop.

One particularly haunting portrait in “Other Absences” is that of Mary Murphy, a high school student.  She was hit and killed by a car, along with Ellen and Leo O’Donnell, mother and son.  The driver, Henry Brock, was drunk.  But he was also a wealthy banker.  Brock served just three years in ESP -- one for each of his Irish American victims.

Having bamboozled Americans into believing the nation is on the brink of an apocalypse, Trump and his fellow Republicans are now about to hand the Henry Brocks of today a fat tax cut.

It makes you wonder: Who are the real gangsters?