Pat Quinn was an inspiration whose life truly mattered

The amazing achievements of Ice Bucket Challenge founder, The Mighty Quinn, after life dealt him the cruelest hand possible. 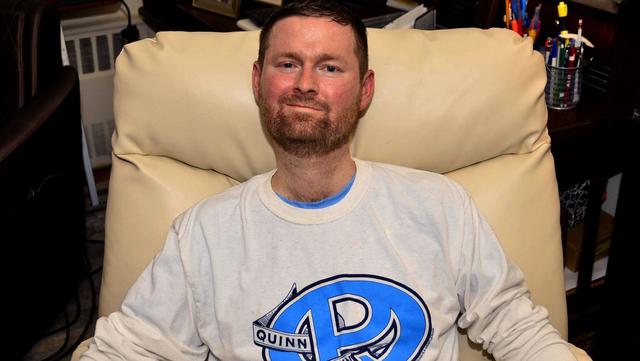 Irish America is blessed to have counted Pat Quinn as one of our clan and he will be long-remembered. We plan to honor this unforgettable treasure in 2021.

Most of us – 99.9 percent of us, actually – would curl up and prepare to die when confronted with a diagnosis of incurable ALS, as Pat Quinn faced back in 2013 when he was only 30, a former standout rugby player at Iona College, engaged to his college sweetheart and the world seemingly at his feet.

But most of us aren’t Pat Quinn, nor would we be able to even contemplate the great feats he achieved after life dealt him the cruelest hand possible.

Pat’s body started acting strangely in 2011, and after a battery of tests over more than a year for other conditions turned up negative, it wasn’t a total shock when doctors at Johns Hopkins in Baltimore delivered their verdict.

“It was weird, it was very tough,” Pat told me in 2014 during the first of my many interviews with him when I asked how he felt when he heard the three dreaded letters – ALS.

“A lot of my symptoms were pointing in that direction. I was just avoiding the day that I would know for sure.

“I didn’t really talk about it much to people and kept to myself. So I guess it was more of a shock to other people as opposed to me. But hearing it was obviously devastating.”

Pat got over the stunning diagnosis real quick and got to work.  “I wasn’t going to take it lying down,” he said.

The summer of 2014 was when the now famed Ice Bucket Challenge for ALS research took off.  Pat and his dear friend, fellow ALS patient Pete Frates who lived in Boston, were the co-founders and driving forces behind its massive, viral international success that resulted in an unprecedented $220 million going towards the ALS Association and further global research into the crippling disease.

“Pete was diagnosed a year before me and his progression has been much faster than mine. We connected because it’s not normal for people so young to have ALS,” Pat told me, noting that the average age for diagnosis is 50 and above.

“We both chose to fight instead of sit back. Our networks are big and we know a lot of people. He knows more than me.

“The Ice Bucket Challenge kind of first ran through my network and then got to Boston where Pete is, and when it touched his network it just went viral from there. Pete knows guys who play pro sports so some athletes took the challenge, and it really went from there.”  (Pete passed away in December of 2019.)

Videos of the famous – politicians, celebrities, athletes – and the rest of us dousing ourselves in freezing buckets of ice-cold water were the summer sensation of 2014.  Pat and Pete were the inspirational ambassadors for the fundraising juggernaut – Pat’s many media appearances at the time included a spot on Entertainment Tonight and Good Morning America to help drench the co-hosts in ice water.

The following year, the Ice Bucket Challenge won a host of awards at the prestigious Cannes Lions International Festival.  Pat and Pete traveled to France for the event, which saw their movement nominated for 13 awards and winning 11 of them.

There were so many accolades.  A Webby Award. A Facebook Blue for Good honor.  A nomination in 2014, with Frates, for Time magazine’s Person of the Year.

But inevitably, viral sensations don’t stay super-hot forever.  The Ice Bucket Challenge eventually cooled off somewhat, though it’s still a ritual that devotees participate in each summer, determined that ALS stays in the spotlight.  “Every August until a cure” were Pat’s determined words when accepting his Webby Award, and it’s a phrase that ALS fundraisers continue to live by.

Pat didn’t join the race for ALS remedies because he sought nice trophies or fancy trips to Europe.  He just wanted to get better and shared the same hope for all of his fellow ALS warriors.

What to do when the media spotlight dims?  If you’re Pat Quinn you double down on your efforts to raise awareness and make as much damn noise as possible about ALS and what needs to be done to help those with the disease.

Outside of the Ice Bucket Challenge, Pat coordinated multiple fundraising and advocacy efforts through his social media accounts – both his personal one and Quinn for the Win Facebook pages were vital sources of information that he shared about ALS developments and his life, warts and all.

The last time I visited Pat in person was October of 2017.  I was eager to do an expanded interview and have a proper catch up instead of our usual brief chats, and he readily invited me to his apartment in Yonkers, his hometown.

The home was lovely and cozy, with a picture-perfect view of the Hudson River from big windows and a large flat-screen TV so Pat, stationed in a comfortable looking recliner, could watch all his favorite shows.

His devoted father and primary carer Patrick Liam, who came to the U.S. as a teenager from his native Co. Down, was there too, tending to his son when needed and showing me all the awards that Pat had received.

Pat had lost his mobility and was non-verbal, so we communicated via a large computer screen positioned in front of his recliner which he skillfully used to make sentences via eye movements thanks to fantastic technology.

One recollection from our interview back then? The love and support he received from the Irish community, he said, was “the best!! The best!!”

He typed the exclamations for emphasis.  “Nobody has been more supportive than the Irish, especially here in Yonkers.”

Pat got his speaking voice back, virtually, thanks to further improvements in technology in 2018 pioneered by the ALS Association and a Canadian company called Lyrebird which launched an initiative called Project Revoice.

“Quinn, wheelchair-bound and without the use of his hands, lost his voice to ALS some time ago, but Lyrebird and Project Revoice sourced past audio interviews he gave which allowed them to tailor their technology using his old, recreated voice,” the Irish Voice reported in April of 2018.

“This has changed my life.  As my voice weakened, I slowly became less involved in communication. I didn't want to hear the computer, so I would not get involved in conversations,” Quinn told me via his new communication platform – and he sounded great!

I was struck by a January 2019 blog I read on an ALS website, Augie’s Quest, in which Pat spoke so honestly and heartbreakingly about the breakup of his 2014 marriage to Jenn Flynn.

“The emotional and mental aspect (of ALS) if you ask me is even more devastating.  It changed me and the person I loved the most – so much that our marriage didn’t survive.  It crushes me. Some couples find a way through it, many do not,” Quinn wrote on the blog.

“I am a young man. Everyone around me is having kids, building families, the things every man desires as he gets older.  I am not, and it’s something I will never get over. ALS is an emotional roller coaster, unlike anything you could ever imagine. If you’re not crying, let me tell you, I am.”

I had known that Jenn was no longer a presence in Pat’s life, and after reading his blog my nosy self felt compelled to ask if he wanted to elaborate further.  As usual, he responded immediately and authentically.

“I am glad I shared it. From the very beginning, I wanted to be honest and outgoing when telling my story. It’s not easy, but it’s something that people need to see…it’s probably the first time I opened up about Jenn and I,” Pat told me.

“The response has been incredible. So much support! It means a lot when I put myself out there and receive encouraging feedback.”

For the past few days, I’ve been re-reading my Facebook chats with Pat.  We did a couple of interviews in 2020.  I thought Pat would have tremendous insight on how we all could cope with Covid-19 isolation, and he didn’t disappoint when we Facebooked in May.

“Social isolation is difficult. Not seeing family and friends, it can be hard for us. This is the time to work on yourself.  Read more, write something, make plans for the future, create goals, and if you really want -- watch Tiger King on Netflix. It's nuts!” he told me, and of course his words of wisdom were front page Irish Voice news that week.

“But this will pass.  Let's be the best version of ourselves possible when we all come together again.”

On a personal note, I’m so saddened by Pat’s passing.  It’s been a true honor to be somewhat in his orbit, to watch this selfless super-human teach us real life lessons and have him share some of his thoughts with me.

There will be ALS relief, sooner rather than later, thanks in large part to Pat Quinn.  And aren’t we so blessed, as Irish Americans, that we get to claim this mighty hero as one of our own.

We’ll be fully supporting the undoubted future efforts to build a permanent and proper memorial to Pat in Yonkers once this pandemic passes.  It will be a wonderful way to get 2021 going – honoring an unforgettable treasure who will forever make us proud.