Irish storyteller Rab Fulton is going virtual with his 'Midnight Macabre: Uncanny Tales for the Bewitching Hour' on July 23. 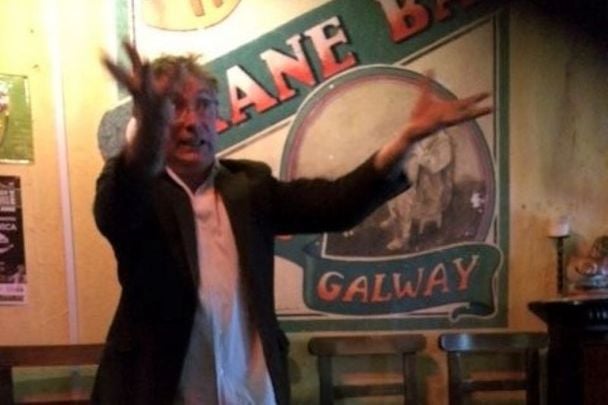 Rab Fulton at The Crane Bar in Galway ErinMeehanBreen.com

If you are in Ireland, it’s not hard to find a bit of storytelling in the pubs.

“Let's face it, a lot of the Celtic stories are a bit horrific anyway,” Fulton says with a laugh. “So, I thought I’d focus on a few darker tales.”

Fulton is known around Galway City pubs where he has been entertaining in bars, like The Crane, for years with his engaging and entertaining style that draws his crowd in, and leaves them all amazed. He is also a lecturer at the National University of Ireland Galway and has just completed a new collection of stories called “After the Fall: weird macabre stories of Scotland, Ireland and Beyond”.

“They include horror, murder, and the dark fairies,” Fulton says. “And one is even about current day Galway, but with a dark twist.”

He’ll be sharing his stories live on the Internet, which anyone anywhere can access for €5.85. It will bridge the bewitching hour in Ireland Friday 23 July starting at 11:30 pm and going ‘til 1 am Saturday morning. But people can tune in for lunchtime in Australia or an afternoon of stories on the west coast of the United States.

You can get more information on his upcoming performance 'Midnight Macabre: Uncanny Tales for the Bewitching Hour' online here.

And you can hear Rab Fulton telling stories in Episode #11 of Erin’s Isle.