World looks on in astonishment as Kyle Rittenhouse walks free

The trial has polarized the nation, with some people heralding the teenager as a hero who acted in self-defense and other more rational people recognizing that Rittenhouse has escaped justice and benefited from a system that is tailor-made for people like him. 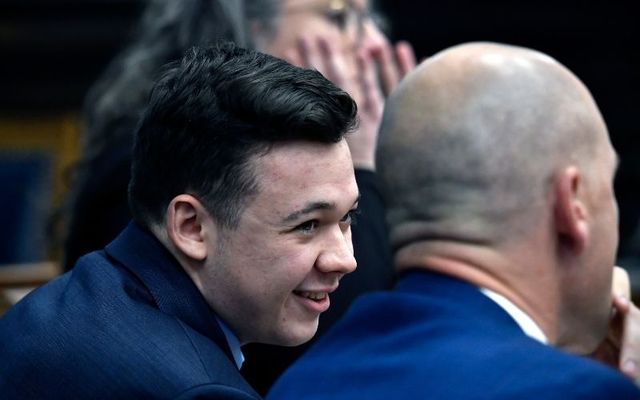 Kyle Rittenhouse during his trial in the Kenosha County Circuit Court. Getty

As Kyle Rittenhouse walked free from the Kenosha County Circuit Court on Friday, America slid even further toward irreconcilable divisions on gun control and racial tensions that show little signs of healing.

The trial has polarized the nation, with some people heralding the teenager as a hero who acted in self-defense and other more rational people recognizing that Rittenhouse has escaped justice and benefited from a system that is tailor-made for people like him.

The trial has been far less polarizing outside the US, where gun culture has not warped and twisted the minds of a substantial proportion of society.

Kyle Rittenhouse would not have walked free in any other country in the world because no other nation in the world would fetishize a 230-year-old constitutional amendment that was brought in following a colonial revolution.

Nowhere else in the world would it be acceptable for a literal child to act like a vigilante with a fully loaded automatic rifle and antagonize a group of protestors-turned-rioters at a time when racial tensions were running at their highest in years.

The conservative defense that Rittenhouse acted in self-defense is pure garbage. The 17-year-old's actions on that night in Kenosha were akin to poking a sleeping dog in the eye and then saying that it's the dog's fault when it wakes up and bites you.

Here is a teenager who carried an assault rifle and played the hero amongst a crowd of deeply upset protesters in the aftermath of a horrific display of police brutality toward an African-American man.

Contrast the reaction of Kenosha police to Rittenhouse and Jacob Blake, whose brutal and remorseless shooting kickstarted the protests in Kenosha.

Blake was shot several times in the back and side as he entered his girlfriend's SUV to allegedly retrieve a knife, leaving him paralyzed from the way down.

Rittenhouse, meanwhile, got to his feet after killing two people and seriously wounding another before walking toward the police with a rifle strapped across his chest.

Officers told Rittenhouse to stop advancing and merely attempted to pepper spray him when he continued to move forward.

Do not think for one second that the outcome would have been the same if a black man had advanced toward police in a similar manner after shooting several people.

Of course, the trial of Kyle Rittenhouse highlights a much broader issue in a country that has an unsettling fetish for guns.

Literally nowhere else in the world would it be remotely acceptable for someone to carry an assault rifle several years before they can consume alcohol.

The only guns that Rittenhouse should realistically have had access to are in Toys R Us or Call of Duty.

In fact, Rittenhouse was technically not even legally allowed to own Call of Duty when he killed two people in Kenosha on August 25, 2020.

He will doubtlessly become the poster boy of some right-wing gun-toting organization in the future.

Republican Representative Matt Gaetz has even hinted at offering him a congressional internship so that he can continue "helping the country in additional ways".

Only in America could the deaths of two people be twisted into something to be proud of rather than a sad and sorrowful affair.

He will become a modern-day Bernie Goetz among racists, conservatives, and groups such as the NRA and will have a sickeningly bright future in whatever career path he chooses while the men he killed get no justice.

He will have NRA and republican speaking gigs across the country and will be held up as a hero for the rest of his life as long as he speaks to the right people.

After all, he happily posed with Proud Boys in a Wisconsin bar after pleading not guilty earlier this year and will surely find himself in similar company now that he has been found not guilty.

Others will simply shake their head in astonishment as another racist criminal circumvents the US justice system in the name of self-defense.

President Joe Biden will not be among them, however.

The President called on people to "abide" by the jury system after Rittenhouse evaded justice, turning his back on comments he made in August 2020 when he labeled Rittenhouse a "white supremacist".

And don't get it wrong, Rittenhouse's actions were textbook white supremacist. even if his victims were white. Throughout the history of the civil rights struggle, white people who have been sympathetic to the plight of African-Americans have been brutally punished by bigots unwilling to change the status quo.

Biden perhaps needed to show public faith in the US justice system, but he missed an opportunity to stand with the victims and the oppressed and instead enabled a rigged system to persevere.

In any event, his pleas for people to remain peaceful in the wake of the verdict went unheeded, with riots breaking out in Portland as disillusioned protesters angrily reacted to yet another insulting demonstration of "justice".