IrishCentral Contributor Arunansh B. Goswami, a historian and lawyer based in India, takes a look at the life of George Thomas, the Irishman who went on to rule in India. 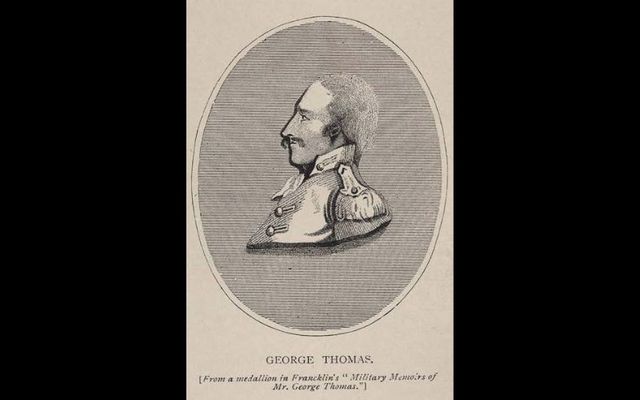 It’s been a long time since I joined the Scindias of Gwalior, an erstwhile princely family of North India as a researcher, digging into the annals of their history with often appreciated alacrity and enthralment.

These warriors and mercenaries created a military-industrial complex in north India, which led to the predominance of the Maratha war machine, being powered by the efforts of this multinational army, but nevertheless known as “Fauj-e-Hind” as per the decision of the profoundly nationalist ruler Mahadji Scindia.

After 1760 appeared several multi-national mercenaries in India such as the Armenians Aratoon and Jacob, Hanoverian Pohlmann Hessings, the Hollanders; the Filoses the Neapolitans; and, of Britons and Anglo-Indians, the Skinners, Gardner, Shepherd, Sutherland, Davies, Dodd, Vickers, Bellasis and the brothers Smith. Most of these were, sooner or later, in Scindia’s service.

There were a plethora of foreign mercenaries in Scindia’s Army, but none dared to overthrow or challenge the authority of Maharaja Scindia - except an adventurous Irishman who, though a mercenary of a dismissed Maratha noble of Scindia, challenged the authority of Scindia itself in Haryana!

We find in the book “The Great Anarchy - Or, Darkness Before Dawn" by Henry George Keene and other sources that George Thomas was a native of Co Tipperary in Ireland, where he was born to a poor Irish family.

Coming to Madras as quarter-master of a man-of-war in the squadron of Sir Edward Hughes, he deserted in 1782, after the four inconclusive engagements fought in those waters between that Admiral and the Bailli de Suffren. After an obscure period of adventure among the Poligars of the Carnatic, he appeared at Sardhana, where the relict of Sombre, known in Indian history as the “Begum Somru,” was holding the fief that had been allotted to that General for the maintenance of his legion in the imperial service then administered by Scindia.

The Catholic Queen of Sardhana

Born as a Muslim, Begum Samru Farzana Zeb un-Nissa (1753) to Latif Ali Khan, a nobleman of Arabian origin, who had settled in the town of Kotana, 30 miles north-west of Meerut, she was six years old she lost her father. She had a graceful way; and she must have been uncommonly beautiful at the age of 15, to have caught the eye of a European mercenary Walter Reinhardt Sombre, whom she later married.

On 7 May 1781, aged around forty, she was baptised as Joanna Nobilis Sombre by a Roman Catholic priest. However, she was popularly called Begum Samru.

Begum Samru was the only Catholic Queen in North India. The Basilica of Our Lady of Graces was constructed on the orders of Begum Samru. Before becoming a Basilica, the Church which she built became a Cathedral for a short time, with its own Bishop. In the Church is a letter; Begum is known to have written to Pope Gregory XVI: “I am proud to say it (the Church) is acknowledged to be the finest, without exception, in India." It was the service of this Catholic Queen that George Thomas joined.

Soon, George left the service of the Catholic Queen of Sardhana and settled in Anoopshahar, under the protection of Col. MacGowan, the British Brigadier, of the British Frontier Force. Thomas lived a pleasant life as long as his savings held out. Then, under the pressure of necessity, he was compelled to look about for means of livelihood.

George joined Appa Khande Rao one of the top officers of Mahadji Scindia, who was dismissed from service lately. Thomas agreed to join, with his KHAS RESALA (a small body of cavalry, which men in his position always retained about their persons), and received an order to raise one hundred more cavalry and one thousand infantry, for whose maintenance he was to receive three Parganas (group of village ) in the neighbourhood of Alwar of Tijara, Tapukra, and Firozepur Jhirka as fiefs for the maintenance of the army. Once George saved the life of his boss Khande Rao, the grateful Appa Khande Rao adopted George Thomas the Irishman as his son and gave him all his estates.

The Irishman becomes ruler of Haryana

In March-July 1794, George Thomas, the aspirational Irishman, went on a military campaign in what is now the Haryana state of modern India. George's campaign played an important role in giving Haryana its one and only Irish King. He occupied Tijara, looted Bahadurgarh (in Rohtak district), and captured Jhaijar, and marched towards Pataudi. All these territories were included in his jagir. Here, he built a fort known as Georgegarh which came to be popularly known as Jahazgarh.

He also subdued Bakht, the rebel zamindar of Rewari. He also compelled Ganga Bishan, an Ahir (Caste) who was one of the strongest zamindars of Haryana having 14,000 fighting men on his side, then he also captured Beri.

In 1795, about 5,000 Sikh raiders under Karam Singh made intrusion in the Maratha district in Doab. Apa Khande Rao sent George Thomas towards Saharanpur. George maintained peace and order in the area and the Sikhs fled away. Now Lakhwa Dada even gave Parganas of Panipat, Sonipat, and Karnal to Thomas for his maintenance. When Lakwa Dada died in 1797, his son Waman Rao succeeded him. George Thomas, who was neither getting money nor proper support from Marathas, declared his independence, creating an independent kingdom with its headquarters at Hansi. Haryana was now the Irishman’s Kingdom.

Governance of Haryana under the Irishman

As per author Satish Chandra Mittal in his book “Haryana, a historical perspective,” George Thomas made efforts to provide his subjects with the basic needs of life. As there was a scarcity of water, he constructed wells. He encouraged people to live there. Its population rose to 6,000. He established a mint and coined his own rupee known as Sikka-j-Sahib.

In his own words, "I established a mint, and coined my own rupee; cast my own artillery, commenced making muskets, matchlocks and powder." Now he had a force of eight regiments of foot, a thousand horsemen, and about fifty guns. According to late historian Jadunath Sarkar, the revenue yielded by the 14 paraganas' consisting of 253 villages was Rs. 2,86,000.

The Irish Maharaja of Haryana defeats the Sikh chiefs

In January 1800, George Thomas made an attack on Patiala the Sikh kingdom when requested by princess Sahib Kaur of Patiala, who had been imprisoned by her brother, Sahib Singh, the Raja of Patiala. George plundered the city and made a treaty in March 1800 with the Raja of Patiala. It was agreed that the districts of Budsikri, Jamalpur, and Toham from Patiala, Kanpori from Kaithal, and Safidon from Jind both Sikh kingdoms, would be given to George Thomas.

Then, George Thomas besieged Sirsa, a fort belonging to the tribe of Muslim Bhatti. He remained there for seven months and collected huge booty and captured Bhatner.

James Skinner the Scotsman and George Thomas the Irishman

“While Scindia was muddling through his campaign against Holkar, another war was being fought out near Delhi. It was a personal war between Perron and George Thomas, the Irish Rajah, and Skinner played a conspicuous part in the affair. If de Boigne was the most successful of all the European adventurers in India, to George Thomas must go the credit for being the most audacious. Known throughout Hindustan as Jowruj Jung (Warlike George), Thomas was a native of Tipperary.” We find this mentioned in the book Sikander Sahib The Life of Colonel James Skinner 1778 -1841 by Dennis Holman. Skinner, who was in the service of Scindia, was one of the admirers of the bravery of George Thomas in spite of the fact that they were in opposite camps.

The end of the Irishman's Kingdom of Haryana

In September 1801, Perron, the General of Scindia, sent Major Louis Bourquin, a Frenchman in Scindia’s service, with ten battalions of sepoys, 3,000 cavalry, and 500 Rohilla Ali Ghol to attack Thomas, who was then plundering Jind. George Thomas went back from the battle.

Another force of Perron under L.F. Smith and E. Falix Smith attacked Georgegarh. Both the Smiths were defeated. They joined Major Bourquin, who was marching towards Georgegarh.

On 1st October 1801, a severe battle took place, in which about 600 casualties took place on each side. We know that George Thomas had defeated several Sikh Rajas earlier, the Sikhs came to help Bourquin. They cut the supply line of George Thomas and the scarcity of food stuff prevailed in his camp. Flour began to sell at eight seers for a rupee. The Irishman fought bravely but had to eventually leave the battlefield and go away to save his life. He left the fort on the night of 10th November 1801 with a small cavalry. Georgegarh was captured. Major Bourquin followed George Thomas to Hansi. By this time, George Thomas was without men, money, or ammunition. At last, when he was surrounded, he surrendered to Bourquin on 23rd December 1801 and opened the gates of the capital. He was allowed to go to British India.

He reached Anupshahr in January 1802, and from there he went to Berhampur in Bengal where he died on 22nd August 1802. He was buried there. The Georgegarh fort which was named after the Irish warrior George Thomas later came into the possession of the Nawab of Jhajjar and he named it Hassangarh. Thus ended the Irish Kingdom of Haryana.

India and Ireland have had a history of resistance against British imperialism, and we have had several opportunities when we have collaborated for mutual benefit. From the Connaught Rangers mutiny to the Indian-Irish Independence League, numerous threads connected India and Ireland as both fought for independence from the British.

From Margaret Noble alias Sister Nivedita to Annie Besant who founded Home Rule League in 1916 to demand dominion status for India within the British Empire, Irish leaders have played an important role in India’s struggle for freedom.

In 1932, the Indian-Irish Independence League was founded. The most prominent Indian member was Vithalbhai Patel, the older brother of Vallabhai Patel, who in India is known for uniting India into one single country from a motley of princely states of divergent interests and British territories. Now when India is observing the platinum jubilee of it’s independence Azadi@75, let’s pray to God that the friendship between India and Ireland becomes even stronger over time.