Reminiscing about family and their journey from the bogs to the other side of the world. 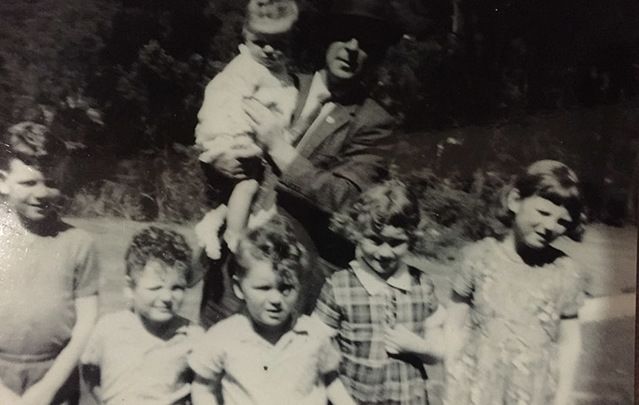 I grew up on a farm in Irish midlands. I did my fair share fair of picking spuds and shaking out silage, and clamping turf. As part of a large family, reared on less than a hundred acres of average farm land, things were always going to be tight.

Hardly anything was ever thrown out. Used baler twine doubled as belts for our trousers. Calamities like late cold springs that had our sheep running riot on our neighbors’ fields; stillborn calves and ruined crops were common, and when they occurred, they all cast a pall about the place. But for all that, my father always contributed generously to the monthly church dues which were read out at the end of Sunday Mass.

Tasmania is now my home. Lying 240 miles south of the Australian mainland, it’s a sparsely populated island of 500,000 people. Formerly known as Van Diemen’s Land, the ruins of the Port Arthur penal colony on the Tasman Peninsula still offer more than a hint of the harsh environment that prevailed there for half a century before it was shut in 1877. It was no place for the faint-hearted; with whippings and lengthy periods of solitary confinement standard forms of punishment.

The former penal colony now enjoys world heritage listing and it attracts over 250,000 tourists annually. William Smith O’Brien’s cottage is one of several restored buildings that occupies a prominent position at Port Arthur. A Clare man, O’Brien spent several years at the colony after he was deported here for his role in the Young Irelander Rebellion in 1848. He was subsequently pardoned and lived out his final years without incident in Wales.

I came here of my own accord five years ago. Right now, I probably should be outside splitting more firewood. Or, I could be slashing the bracken that’s getting out of control down in the bottom paddock. We also want to expand our vegetable garden and possum-proof the perimeter. But it’s been raining on and off for the past few days; and sitting by the wood fire, with a book is my preferred option when the weather is lousy. Winters in Tasmania can be surprisingly cold.

In Australia, tillage farmers also fret about the weather. Climate change is ruthlessly rendering large tracts of land down under useless for any kind of farming. Some parts of Australia have now endured years of drought. In Ireland, hordes of crows and pigeons always seemed to regard our ripening acres of barley as part of their staple diet. The price of livestock could be fickle and of course Irish summers meant saving the turf and hay was often a heartbreaking affair.

Although we were happy enough, there was nothing especially idyllic about our upbringing. It hardly mattered who was in charge in Leinster House. Our national school teacher’s alacrity to reach for and use his ashplant cast a long shadow over my attempts to take in anything. Growing up, there were too many of us and not enough to go around. It was hardly surprising that emigrating or heading off somewhere as soon as we could, was a given.

My father, if he was still alive, wouldn’t be impressed with my slouching around indoors. He wasn’t one to slacken off during the day. A plate of porridge could keep him going all day. He wasn’t bothered by driving rain or frost. A farmer for almost all of his life, he’d never cut corners or opt for the easy option. I think he was almost inured to hardship. He almost expected it.

He’d spent almost a decade in Australia working as a laborer, after he’d eloped with my mother whilst on a day out to the Spring Show in Dublin. They remained in Melbourne until an unexpected offer to inherit a farm from a bachelor uncle brought them back to the auld sod again.

By the time of their return, they’d had six children. Four more would be born in Ireland. I have only the haziest memories of our five week voyage on the Greek liner. I know we were rerouted via the Panama Canal due to the Suez Crisis. All I remember is the ship’s cinema, its Olympic sized swimming pool on the upper deck and being seasick.

And almost before we knew it, we were all crammed in a shiny black Morris Minor and driving to Mass in Abbeylara. When we got back to Ireland, there was some hold up in us moving to the farm near Finea, so we stayed for the first few months in a derelict farmhouse that belonged to one of my uncles. Even though it was late 60s, the house near Abbeylara, had no electricity and we had to fetch our water from a nearby stream. It didn’t even have a stove. It must have felt like a retrograde step after their time in Melbourne. But they were back among their own people and that must’ve meant something to them. As a five-year old, I wasn’t fussed about the lack of running water. There was a settle bed in the living room where I slept with one of my brothers. I remember the long shadows and the light of the Tilley lamp, the distinctive smell of open turf fire and the exterior whitewashed walls.

But there’s hardly any bog here in Tasmania. So there’s no call to clamp turf. There is peat to be had but only minuscule amounts are harvested under license to smoke malted barley in the production of Tasmanian whisky.

It’s up there with Jameson, and a fine drop to sip in front of the fire when it’s cold outside.