In County Longford, our genealogists discovered a gem in a ballad in honor of Rosie Hackett.

While traveling through Ireland on a genealogical hunt our writers discovered a true gem in Thomas Igoe's Rosanna "Rosie" Hackett: A Ballad".

Rosie Hackett was only 18 years old when she helped organize a strike of 3,000 workers at Jacobs Biscuits.  She co-founded the Irish Women Workers’ Union with Delia Larkin and was active in the Easter Rising in 1916. On Easter Tuesday, under the command of Constance Markievicz, Rosie was in the area of Stephen’s Green which fell under attack. After surrendering, Rosie was imprisoned in Kilmainham Jail for ten days.

The first time we heard the ballad “Rosanna Rosie Hackett” was in June 2016 when we were just outside of Newtownforbes, in County Longford, on behalf of a genealogy client.  We were in our car looking for where the Thompson house would have been in the mid-1800s since our client’s ancestors lived in Parish Clonguish at that time.

By pure chance, Stephanie Igoe came out of the house we were parked in front of and made a phone call to a neighbor who told her that lo and behold she now lived in what was the Thompson house.  Stephanie invited us in and her husband Thomas came in from the backyard where he was mowing.

That led to one of our most cherished moments in Ireland. Before we knew it, Tom sang to us the most beautiful ballad he had composed called “Rosanna Rosie Hackett.”  We sat mesmerized by the lyrics and melody as Tom accompanied himself on his guitar.

We left with a copy of the ballad and listen to it frequently to remind us of the courage of Rosie and her women colleagues. We’ve made nine trips to Ireland and our short stay in Stephanie and Tom Igoe’s house was one of those incredibly fantastic happenings that occur to us when visiting the Emerald Isle. The “Luck of the Irish” was indeed with us on that June day in 2016! 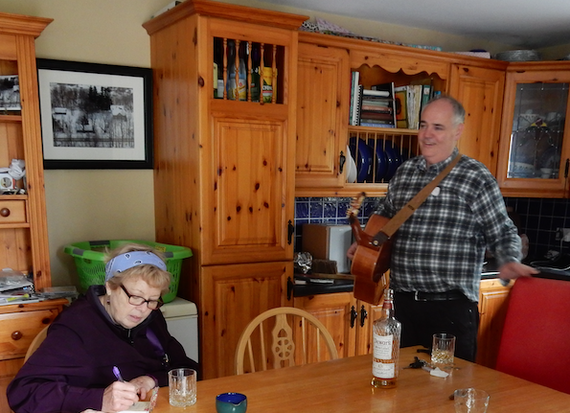 Tom Igoe entertains us while Kate jots down contact information for Tom and Stephanie.

We recently contacted Tom and asked him what inspired him to write the ballad.  His reply was, “I wrote the ballad Rosanna "Rosie" Hackett for the celebrations of 1916. I decided to write about a woman because I felt there was very little mention of women and their contribution to the 1916 Rising.  I was drawn to Rosie as she was relatively unknown, but her story stuck with me because it took '400 policemen to take 4 women down'.

"I also knew that a new bridge over the river Liffey had been named after her in Dublin. I contacted her nephew John and after a fair bit of investigation, we agreed to meet. John brought me to the tenement where Rosie lived and played for me taped conversations Rosie had given a few years before she died.

"One conversation stuck with me as she always referred to James Connolly as Mr. Connolly. There was a great deal of genuine admiration and pride in her voice. Her nephew John and I have kept in contact since.” 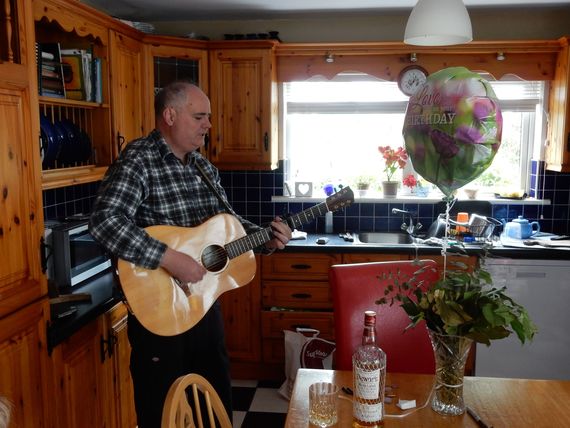 We were spellbound as Tom Igoe sang Rosanna “Rosie” Hackett to us in his very own kitchen!

Below is a version of the ballad sung by Stephanie and Tom’s niece Janice Igoe who is accompanied on guitar by Ben Folkman.  The ballad is accompanied by a PowerPoint presentation that brings to life the role of Rosie and others during the Easter Rising in 1916.

* Kate and Mike Lancor live in Moultonborough, NH, U.S., and have traveled to Ireland numerous times. They run a genealogy search business and can be reached on their Old Friends Genealogy website or by emailing oldfriendsgenealogy@gmail.com. You can also visit their Old Friends Genealogy Facebook page. If you have “hit a brick wall” or simply don’t have time to “chase” your ancestors, then send them an email to see if they can help!