The magic of Christmas for me lies around my belief in Santa Claus. 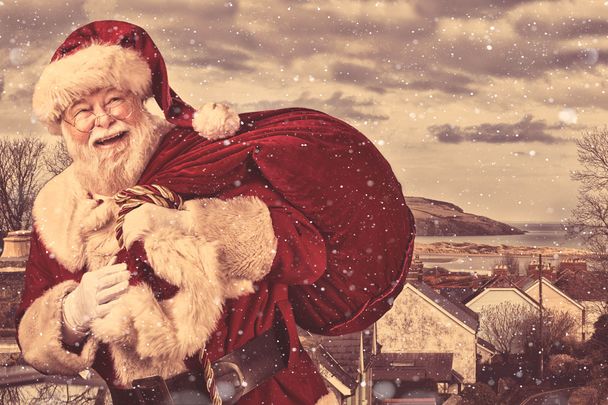 Keeping the mystique of Santa alive and well is a priority for me this Christmas season. Getty

Believe in Santa Claus always to keep the magic in Christmas

As a mom of many, keeping the mystique of Santa alive and well is a priority for me this Christmas season.

My oldest just turned seven last week, the next in line is five and the triplets are now three-years-old. They all have a healthy curiosity about pretty much everything and, while the bigger two can be skeptical at times, more often than not, they believe what I tell them - especially as it relates to things they want to believe in, like the Easter Bunny, Tooth Fairy and, of course, Santa Claus.

Keeping the magic alive gets harder when the grammar school years arrive. If your child is still a sweet, innocent believer, there is an excellent chance he will meet a kid on the bus or playground or classroom who will tell him that "Santa isn't real" or "only babies believe in Santa."

When your wee one comes home with this news, it will break your heart; the notion of losing that innocence is just too much to bear. So, here are a few tips to get (or keep) things back on track -- to keep the faith in Santa Claus this Christmas season and hopefully, for many more to come!

1. Santa has a LOT of helpers.

Even Santa can't look after all those presents by himself. Image: iStock.

Once they hit a certain age (somewhere between three and six for my little clan of elves), kids will start to question how Santa can be at the mall AND the Christmas tree lot AND on every street corner ringing a bell AND on TV. This tricky line of toddler interrogation can be easily navigated by introducing the notion of Santa's Helpers.

I mean really, how is ONE guy supposed to make and deliver all those toys? Read all those letters? Pose for all those pictures? It's just not possible.

Santa has been in business for ages and, like any good businessman, has learned the fine art of delegation. All those pseudo-Santas roaming the streets are his A-team, the front line, the assistants to the real Santa as he makes his list and checks it twice. Given how literal kids can be, they seem to accept that Santa needs helpers. And, may even understand that not all helpers can grow a good beard or belly, which is why some of them are saggy and soft!

Read more: The most beloved Irish Christmas traditions according to YOU

2. Santa only brings presents to believers

Don't believe in Santa? You'll find yourselves with an empty stocking on Christmas Day. Image: iStock.

If disbelief continues after the conversation about Santa's Helpers, it's time to talk about truly believing... as in, "if you believe in Santa, he will bring you gifts and if you don't, he won't."

It sounds harsh but it's simple and straight-forward; it's also remarkably effective because the fear of waking up on Christmas with no gifts under the tree is enough to spur most skeptical tykes into at least a modicum of belief... and that's all it takes for the magic of Santa to seep back into a doubting heart.

3. Even Irish Moms believe in Santa

I love telling my kids about what I left out for Santa when I was younger. Image: iStock.

Show that you believe in Santa too. Write him a letter. Talk about what kind of cookies you liked to leave him when you were a kid. Share the story about the time you tried so hard to stay up all night to see him, only to nod off just as you were sure you heard reindeer on the roof. Kids thrive on these tales ... and, they are fun to share. In fact, sharing them could just be a new family tradition that could be as magical as Santa himself.

Truth be told, there's a small part of me that still believes. .. Not necessarily in a guy with a white beard and a red suit but, in the magic of Christmas. In the joy of the season, and the gift of sharing old traditions while creating new ones, like leaving half-eaten carrots on the front porch to convince any would-be naysayers that not only did Santa come and nibble on a few cookies on Christmas Eve but, his reindeer enjoyed a snack as well!

What is your favorite memory of Santa Claus? Tell us your stories in the comments section below.