"They say every day you spend fishing adds time to your life...so many fish, so little time." 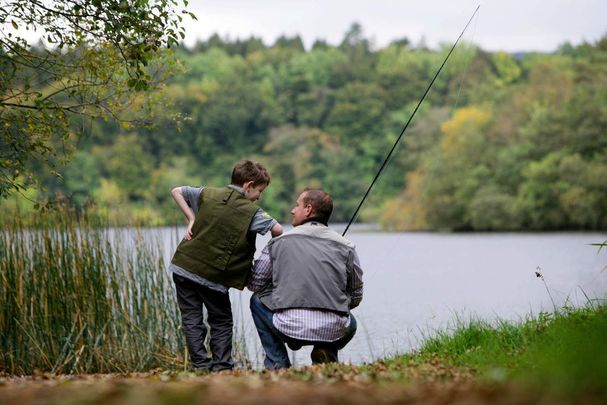 "I saw firsthand how much fishing... thrilled my friend Sid Leeds to no end. His joy was childlike." Tourism Ireland

My fondest memories since childhood have always rotated around water. I have found joy in the multitude of ways to have fun in, near or on water.

Joy in water from swimming and snorkeling. Joy upon water from paddling a canoe or kayak pulling the oars of a rowboat or skiing on water or snow piloting a sunfish or 38-foot Tartan. Joy near water from fishing in myriad styles and venues, each of which calls for different techniques that can take a lifetime to master. Fly fishing, spin casting, baitcasting, artificial lures or bait, live bait or dead. Lakes, rivers, ponds, oceans. Water or ice.

Finding joy related to water is a cure for boredom.

My father died at 46 when I was 15 years old. Sidney S. Leeds became my surrogate father through fly fishing. He was my fishing pal whom I adored. He was a dentist of extraordinary talent and a perfectionist by nature.

Sharing the joy I have gotten since my father taught me as a child of five or six how to bait a hook with a worm doubled when I saw firsthand how much fishing whether freshwater for trout or hunting big game fish thrilled my friend Sid Leeds to no end. His joy was childlike.

The first time we fished together for trout he nearly had an orgasm as he landed a brownie. Sid’s face glowed with joy. Were his wonderful smile any broader it would have burst his face. I looked him straight in the eye and said "be careful it’s terminal".

To see firsthand a man in his 50s experience joy with the sheer wonder and awe of a child is magic. Just reminiscing about that day makes me feel I’m still in my 20s. Our soul is indeed forever young if we choose it to be so and always eternal. I am honored to have been the catalyst that brought many years of Joy to Sid.

Sid may have gotten more joy from fishing than I did. He certainly trumped me when he mastered the art of building fly rods. He reciprocated his love of big game fishing with me when he introduced me to saltwater fishing with his friend, Mickey Jaffe.

Freshwater fishing is a one-man show.  Your skill as a tracker and hunter determines success. In the saltwater game, fishing success relies on the tracking skills of the captain and hunting skills of the first mate.

You trade off fishing freshwater for small game where it’s all on you to succeed for a team effort for game capable of taking you for a Nantucket sleigh ride in the ocean.

Our friendship had its roots in what might have otherwise been tragedy. While celebrating the Bar Mitzvah of a relative in Brooklyn Sid had a heart attack at age 50. He was rushed to the nearest hospital, Coney Island Hospital. It is a public hospital owned and managed by New York City.

He survived the heart attack. Visits were restricted to immediate family while he was in intensive care. His survival was in G~d’s hands. All I could do for my dear friend was to pray my kishkas (guts) out for his survival and full recovery,

Sid survived and weeks later was transferred to the cardiac wing to recover. At long last, I was allowed my first visit.

Sid regaled me with stories of life in the cardiac wing. There was the poor chap who needed CPR and the nurse who was so overly excited nearly cracked his ribs. Then there was the newbie doctor doing his residency who mistakenly told the nurse to administer a dose of medicine that would have killed the fellow instantly had Sid not overhead and yelled at the Dr. “don’t you mean milliliters, not cubic centimeters?"

I realized Sid needed a really good distraction to focus his attention and divert it from the shenanigans of a public hospital. An effective and therapeutic activity needed to match the qualities of his character and personality with something that would absorb him.

Sid was blessed with "golden hands" and was a consummate perfectionist. He built his own violin, furniture of heirloom quality and would redo his dentistry work until he was satisfied that it was perfect. Sid Caesar, Mel Brooks, and Carl Reiner were his patients until they moved to California.

For my next visit I brought Sid a fly tying kit. I told him it would give him something to do instead of feeling blue and keep his hands in good shape and limber for when he returned to work.

Little did I know what I created for him.

The next visit a week later he asked for more fly tying material.

Weeks later when we arrived for his long-awaited discharge there were hundreds of perfectionist Sid’s dry flies, nymphs, streamers, wet flys, and midges neatly packed in plastic boxes.

As we were packing up Sid turned to me and said, “What the f * *k do you do with these things? “

And so it began.

I organized a fishing trip to Bosebuck Mountain Camps, on Aziscohos Lake, in Maine, for six of my pals. Sid, his son Mel and three of my friends from business.

The Bosebuck was known for landlocked salmon and trout. There is a plaque commemorating President Eisenhower’s fishing little boy falls. In addition to the lake, the Allagash River is within walking distance from the camp. The cabins were at the water’s edge.

Up at dawn, after a hearty breakfast, we took a packed lunch and fished until late afternoon. We showered, dinned and had several drinks together in the cabin before bedtime.

One of my pals who sold advertising space for Ski magazine was a high-functioning absolutely charming full-blown alcoholic. Sid’s situational awareness of my pal’s prodigious consumption of adult beverages was nonexistent.

At the end of day three, after our cocktail ritual, in the cabin which I shared with Sid and Mel, the other guys left. A minute later we hear an ungodly shriek and splashing sounds. Turns out my Ski magazine pal walked straight into the lake.

Before we get towels Sid says, “ ya think that guy drinks too much?” about a guy that was good for a fifth of vodka a day.

A wonderful time was had by all. Whether fishing for trout or hunting big game the trip thrilled my friend Sid Leeds no end.

His joy was child-like. Our soul is indeed forever young if we choose it to be so.

Sid enjoyed so much time fishing that his wife, Edith, was fond of jokingly saying that I created a fishing monster in Sid and made her a fishing widow.

They say every day you spend fishing adds time to your life.

Love of fishing kept Sid from becoming a cardiac cripple; afraid to exert himself for fear of another heart attack. He conditioned his body to hunt and catch fish.

He adapted, improvised and overcame the circumstances of a heart attack at 50 and lived well into his 90s.

His mantra might have been ~ so many fish, so little time.