Muhammad Ali's grandson shows why America is the "Greatest" 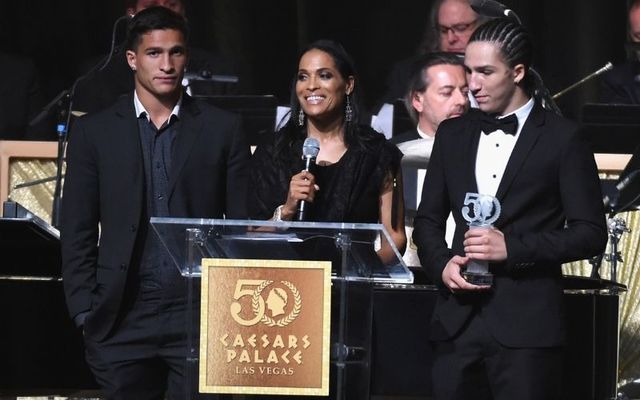 Nico Ali-Walsh (left) with his mother Rasheda and brother Biaggio at a 50th anniversary gala at Caesar's Palace in 2016. Getty

COME with me, back to a simpler day. A time when a much-hyped pugilist with a name like Walsh could lace up the leather and train with a guy named Mike Joyce, at a place called the Celtic Club.

“Wearing a pair of white and black trunks his grandfather gifted to him, Muhammad Ali's grandson Nico Ali Walsh made his pro boxing debut (August 14) with a first-round TKO of Jordan Weeks,” ESPN reported.

With a name like that we can assume he is Irish American. Which would make Nico Ali Walsh Irish on both of his parental sides.

After all, Muhammad Ali’s great-grandfather was one Abe Grady, from Ennis, Co. Clare, who came to the U.S. after the Famine and married a free black woman and had a daughter named Odessa, who went on to marry a man by the name of Cassius Clay Sr. in 1942.

This makes Nico Ali Walsh no less Irish than millions of other proud folks in the 50 states.

A New York Times profile this past weekend noted, “Ali Walsh, 21, says none of his relatives pushed him to box professionally, even though people on both sides of his family have deep connections to the sport. An aunt, Laila Ali, went 24-0 as a pro from 1998 to 2007. An uncle, Mike Joyce, manages fighters and runs the Celtic Boxing Club in Chicago.”

In an interesting bit of timing, the Ali Walsh fight came the same week that the U.S. Census announced new population details based on recent data.

In a development that is about as earth-shattering as heat in August, it appears that the U.S. is growing more “diverse.”

"The U.S. population is much more multiracial, and more racially and ethnically diverse than what we measured in the past," said Nicholas Jones, the director and senior adviser of race and ethnic research and outreach in the U.S. Census Bureau's population division.

But it’s pretty important that we do not forget Ennis’ own Abe Grady, and his daughter Odessa, in all of this.

Irish immigrants came to the U.S. and married and raised families with African Americans -- as well as Italians, Germans, Russians, Puerto Ricans, and more. If that’s not diversity, I don’t know what is.

Yet lots of Americans have managed to take this good thing and mess it up.

First, you’ve got the Proud Boy types -- there they were again, fighting in the streets on L.A. and Chicago last week -- who apparently believe that America was mostly Icelandic until about five years ago.

Never mind that most of the Europeans the Proud Boys worship in 2021 were considered a menacing cultural threat in 1921.

When 30,000 Klan members in robes marched on Washington in 1925, they weren’t calling for more Catholic and Jewish immigrants from the impoverished slums of Europe.

Then you’ve got the folks who’ve turned “diversity” into the latest must-have accessory for their chic and virtuous lifestyles. And it’s got to be the kind of diversity you can really see and hear! In cool urban neighborhoods, preferably where rents are skyrocketing so fast it pushes the diversity they claim to love out to far more boring neighborhoods.

It must have been very frustrating for these folks to read this in The Wall Street Journal: “Where is America Diversifying the Fastest? Small Midwestern Towns.”

If these wealthy hipsters really love diversity so much, maybe they’ll move out there and soak it all in. And let the people who’ve actually made America diverse for centuries just go about their lives.