"Texas shows us what can happen when gung ho conservatives overplay their own hands and menace those they know cannot fight back." 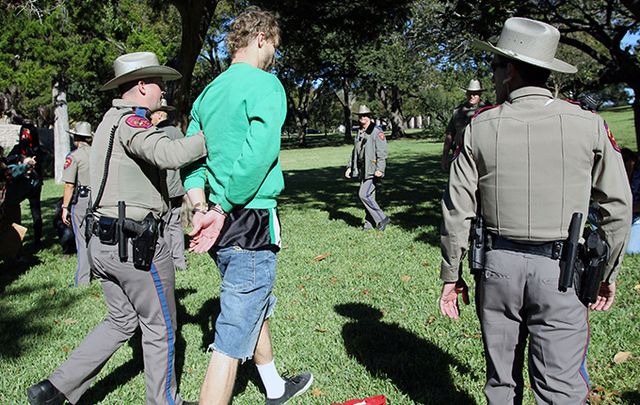 On May 8, in an ominous sign of things to come, the Republican governor of Texas Gregg Abbott signed the unprecedented SB4 bill that permits police officers to ask anyone they stop about their immigration status. It also punishes police chiefs and sheriffs – under threat of jail – if they fail to hold suspects for possible deportation.

It’s a draconian move that turns police officers into de facto Immigration and Custom Enforcement (ICE) agents, critics say, adding that the bill clearly violates the spirit and letter of the 4th Amendment protections against warrantless arrests without probable cause.

It also raises serious concerns about potential racial profiling – you’re fooling yourself if you think it won’t be used most against Hispanics. Not surprisingly, giving its dramatic scope, it has drawn fierce resistance from Democrats.

“This law takes some of the federal policies that we’ve seen and puts it on steroids,” Angie Junck, the supervising attorney at the Immigrant Legal Resource Center in San Francisco, told The Los Angeles Times.

“It seems this governor and the Texas Legislature are trying to outdo the federal government and design their own plan for deportations of residents and to create fear within anyone that’s in the immigrant community to drive them out of the state of Texas,” Junck continued.

So it was fairly inevitable that hundreds of protesters, faced with the increased threat of the deportation of their friends and loved ones, would assemble to loudly protest from the public gallery in the Texas House this week, fearing the hardline move will embolden other states to take similar actions.

On Monday, protestors wearing red t-shirts with the words “Lucha” meaning “Fight” filled hundreds of gallery seats on the last day of the regular sessions of the Texas House legislature, which is usually just a ceremonial day.

But after sitting in complete silence for 40 minutes or so, the protestors stood and began to cheer and blow whistles, chanting at the lawmakers, “Hey, hey, ho, ho, SB4 has got to go!”

It’s what happened next that should really concentrate your minds on where we are all headed as a nation. State troopers were reportedly called to clear out the protesters, and in the process a major scuffle broke out between Republicans and Democrats.

Video shows lawmakers threatening and pushing each other belligerently. Then Republican Representative Matt Rinaldi told Democratic lawmakers that he had called ICE on the protestors.

Recall, the state troopers were already responding to the protest when Rinaldi made his alarming announcement. He then followed up with a threat to put a bullet in one of the Democratic representative’s heads.

One observer pointed out that Rinaldi was Italian and at one time the Italians and the Irish were discriminated against and barred entry to the United States. Rinaldi replied, “Yeah, but we love our country.”

The implication, and the insult, could not have been clearer.  Rinaldi saw people who look Latino and he immediately assumed they were undocumented. So he called ICE instead of the police, underlining that SB4 will inevitably lead to racial profiling.

It was inevitable that a bill this draconian, which upends decades of policing and immigration practice, would lead to tense standoffs because it represents an unprecedented salvo against one of the most vulnerable communities in the country.

The Irish undocumented need to look at SB4 with alarm too. If a police officer gains the power to ask you for your immigration status during a stop of any kind then the threat of deportation will become unbearable and ever present. It will prevent travel of any kind, it will stop the undocumented calling the authorities, and it will make them de facto prisoners in their own communities simply waiting for sentence to be pronounced.

But Texas shows us what can happen when gung ho conservatives overplay their own hands and menace those they know cannot fight back as hard or as well. It also reminds us that no matter how hard or how well Latino immigrants work and serve our country in the armed forces, they will be treated by many as second tier Americans, held in suspicion if not outright hostility.

“I called ICE on you,” Rinaldi reportedly told the protestors and their Democratic representatives. “F*** you!” he repeated over and over.

This is a state representative talking to fellow citizens in 2017. We’re all in trouble.