On Chesil Beach, Saoirse Ronan's often harrowing new film, is set in England in the early 1960's a time that, at first, seems as lost to us now as Atlantis. 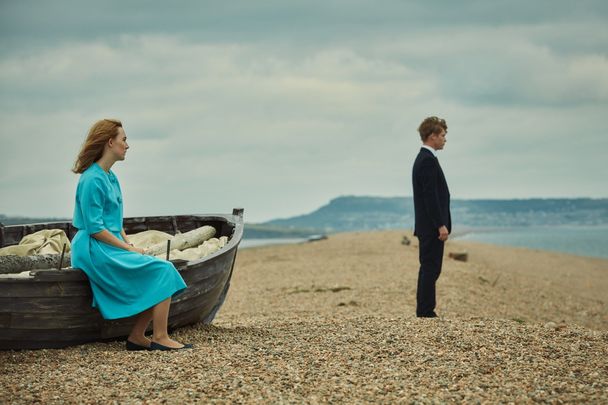 On Chesil Beach, Saoirse Ronan's often harrowing new film, is set in England in the early 1960's a time that, at first, seems as lost to us now as Atlantis.

We are introduced to the young, educated, tasteful and English as if on stilts couple Florence Ponting (Ronan) and Edward Mayhew (Billy Howle). Even their names are evocative of the time and place, as indeed are their clipped Brief Encounter-era accents and outlooks.

They are still young with it all ahead of them, which includes sex. Both are gifted Oxbridge scholars, and their lives are already being mapped out for them by their overbearing elders. On the surface they would seem to have it all.

But something is profoundly wrong in the Ponting household. For a start, Florence's ill mannered and threatening father Geoffrey (Samuel West) disapproves of the match between his debutante daughter and the down at heel, bohemian looking Edward.

Saoirse Ronan and Billy Howle in On Chesil Beach

There are much darker intimations made about Geoffrey's private life and his relentlessly baleful influence over Florence's outlook as the film progresses. As West plays him and as the script mandates he's such an unremitting upper middle class boor that he is almost a caricature of the ruthlessness and bullying that has always undercut so much of English self-reliance. Has he abused Florence in some way other than verbally? The film seems to point to this without saying so explicitly.

Then on their wedding night, which contains one of the most protracted and embarrassing sex scenes ever committed to film, Edward discovers that Florence has an unexpected issue. What that issue is, it turns out, is a horror of carnality, a helpless disgust with the business of sex.

It's not the ideal time to find out, is it? In your honeymoon suite after a tense meal of roast beef and potatoes served up in a seaside hotel by a pair of sniggering wide boys dressed up to look like waiters. As humiliations go, it's just one layered on top of another, and as betrayals of confidence go, it's shattering.

It's becoming clearer to us now, thanks to the passage of time, that much of what we took for granted in the past looks like a horror film to us now.

Saoirse Ronan and Billy Howle in On Chesil Beach

The casually sexist attitudes that curtailed the lives and ambitions of women, the homophobia that silenced gay people and the laws that hounded them into the shadows and out of public life, the biased sexual politics that informed us that marriage existed chiefly for procreation and that women chiefly existed to become mothers. The list of inequalities could keep us here all night.

Saoirse Ronan is flawless as the nervy, self-conscious Florence, profoundly ill at ease in her own skin and also in the world. She's a fascinating mix of rebellion and conventionality, a mix that initially attracts Edward (played by the equally strong Billy Howle) until he discovers that it all comes at a steep price to his own contentment.

After their long, listless attempt at lovemaking ends in humiliation for Edward and defeat for Florence, she storms off to Chesil beach to collect herself, where he eventually follows her, still enraged. You can forgive Edward for his sense of betrayal, and you can forgive Florence for inability to be intimate with him or anyone, but you can't see a way for this marriage to endure.

Florence brings up the example of a gay couple she knows to suggest that there is a way to be coupled in an unconventional manner. We may not have sex, but we can be companions she suggests, but Edward scoffs at this absurd compromise and the couple reach the impasse they were always headed to.

The question is why does all this matter? Why should we care about the private sexual difficulties of people in the long ago, so remote from our own time?

The answer is simple. Because it wasn't so very long ago that we lived in a society where shame and silence about all forms of sexual intimacy maimed everything it touched and we are all descended from those people, as are our contemporary hangups.

Life was never better than in 1963, wrote the English poet Phillip Larkin in his extraordinary period poem Annus Mirabilis. He was talking about the short period between the end of the ban on the Lady Chatterly's Lover book and the arrival of the Beatles first LP, just as the era that we have come to call the sexual revolution was starting up.

We are reminded of the tensions of that far off era in Ronan's often harrowing new film On Chesil Beach. In particular we are shown that it was a time when two consenting heterosexual adults could be consumed by shame for even daring to speak openly about their sexual desires, or the lack of them.

The cold shiver that watching On Chesil Beach delivers is that the awfulness that happened to these poor, floundering people isn't so far away as we like to think.