Key to Christmas was decorating our tree with my father

"Christmas was somewhere between happy and sad, where we all live, and between this world and the next." 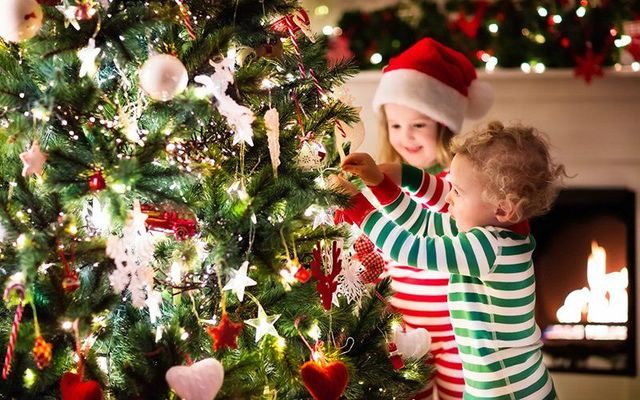 "Christmas was somewhere between happy and sad, where we all live, and between this world and the next." iStock

"Christmas was somewhere between happy and sad, where we all live, and between this world and the next."

My father kept the key to Christmas in four or five cardboard boxes in the cupboard under the stairs. What a ritual that was, pulling out those decorations and untangling the lights in front of the waiting tree. He was meticulous about testing them before hanging them up because each year one or two lights always refused to come on. It made them look a bit like a missing tooth he said.

So first he'd check them on the floor. He'd go from light to light slowly, one after another, looking for the broken ones like a penitent along a rosary.

I loved the little drama of seeing them turned on for the first time each Christmas. They instantly lit up the room with wild color and light.

They said the holidays are coming. They spoke of presents and a turkey dinner. They spread real cheer.

In Donegal, where the sun falls precipitously out of the sky at four o'clock or even earlier in December, you're glad of anything that fights back against the enveloping darkness. For this reason, I liked to help him with the job.

Seasonal decorating fads came and went from year to year, and decade to decade, I recall. In the 1980s it became a thing to spray fake snow on all the window panes.

That was foul stuff that smelled like pine and strange chemicals and it never really settled on the damp cold windows of Donegal. Right away my father put his foot down and forbade their use in our house, making me feel like we were stuck in the olden days. I'd roll my eyes but he was adamant.

Then in the 1990s, menorahs inexplicably started popping up everywhere. Our neighbors, usually unaware they were actually celebrating Hanukkah, would place them in their windows, giving my father an indulgent laugh.

“Next year in Jerusalem,” he'd observe dryly, toasting me with a glass of sherry. People mystified him.

In the ‘80s I'd play all the new wave hits in the background as we worked together. Getting the tree level, getting the step ladder positioned, starting from the bottom and working our way up, it all took time.

In that era, the chart hits were still important to me, and I remember the Human League were at number one with “Don't You Want Me.” A few years later it was Band Aid's record-breaker “Do They Know It's Christmas?” We absolutely knew it was Christmas because that song was everywhere.

Eventually, my father would get tired of all the pop music and ask to hear the RTÉ evening news: shootings just up the road, bombs, hunger strikes, war in the Middle East. Then the weather forecast, which was only ever more rain or more snow.

We felt very far from all the bright lights and all the mayhem up in Donegal because we actually were. Dublin had forgotten about us, so had Belfast, and so had time.

We weren't important to the Republic or to the North. We were the far away, forgotten county that was neither here nor there.

But we didn't mind the neglect. In fact, we welcomed it.

My county had its own amusements. In my town, a horse getting out of a field was considered an event of enormous significance. The appearance of a stray dog was often a subject of intense public debate.

I was surrounded by the most vivid people I have ever met, and I had no sense that we all lived in the back of beyond.

That's probably why, years later, Patrick Kavanagh's poem “Epic” was instantly intelligible to me. It was about the little things that happen in remote communities that nonetheless end up shaping you for life. Kavanagh wrote, “I have lived in important places, times/When great events were decided, who owned/That half a rood of rock, a no man's land/Surrounded by our pitchfork-armed claims.”

He was watching a bunch of local men go to war over a quarter acre of soil. I knew people like that. We all did.

And with each passing year I uncovered another panel of the truth, Christmas wasn't in the boxes of decorations. It wasn't the tree and it wasn't the dinner.

It was just watching my father lighting the lights. It was in the silence that we worked in together as we readied the tree.

Christmas was in the space between things, and not in the things themselves. It was a bit like an old memory or an unmet yearning. You couldn't touch it, but you could still feel it.

Christmas was somewhere between happy and sad, where we all live, and between this world and the next, where we're all headed.

And he knew that all along and let me figure it out in my own time.