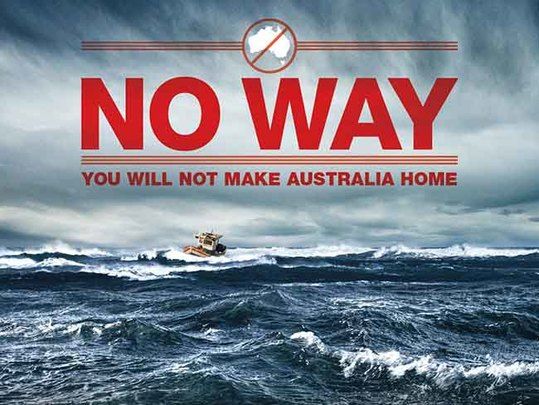 That’s the hard hitting message being sent out by the current Australian government to asylum seekers and undocumented immigrants, in the hope it will discourage more of them from ever setting out for its shores.

The controversial new government approved poster – which has already been printed in 17 languages – reads:  "No way. You will not make Australia home.”

The blunt language and the ominous imagery, part of the Australian government's Operation Sovereign Borders program, ensured the poster became a global internet sensation this week.

To underline the Australian government’s point that the danger isn’t worth it, the new poster presents a tiny boat being tossed by a threatening sea.

Critics are already calling it the anti-tourist campaign of the century.

But the Nonprofit Refugee Action Coalition of Sydney has responded angrily to the campaign, claiming that "almost all the deaths at sea have been caused by the appalling response of Australia's search and rescue services, who have been told to prioritize stopping boats, not saving lives.”

Green immigration spokeswoman Senator Sarah Hanson-Young told the press: “This document is in incredibly poor taste. The fact that it came from the Australian government is a disappointing indictment on our once generous nation which helped to draft the Refugee Convention.”

It’s certainly a marked change of tone from the old days. Back in 1928 Australia was advertising itself as a land of opportunity – but the people it was advertising to lived in the UK and northern Europe.

After the Second World War the country even offered British immigrants a subsidized boat trip for just ten pounds to their new land of opportunity.

Now critics say that it’s ironic that a country founded by Europeans (at the documented expense of the indigenous peoples who lived there) now has the gall to declare itself off limits to foreigners.

Threatening asylum seekers sailing to flee oppression and violence in their own countries has struck most commentators as needlessly cruel.