Is the contempt for the poor expressed in this illustration a reflex of some unspoken guilt? 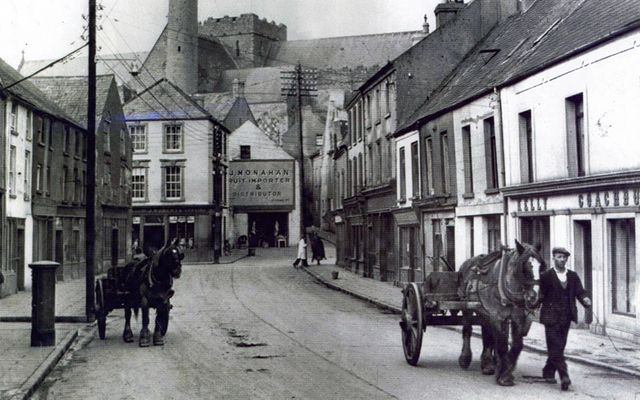 Irishtown, Kilkenny, photographed in the 1940s: Satirical map show how the government abandoned its people. An Post.

Is the contempt for the poor expressed in this illustration a reflex of some unspoken guilt?

The Dublin establishment’s political and spiritual abandonment of the farther reaches of its own country after Independence can be seen in this satirical map of the country from the late and lamented Dublin Opinion magazine in 1941 which was posted on the net in August this year.

In the midst of the Second World War, at the height of the Blitz, the complacent commentariat in Dublin were busy sneering at everything that was not the glittering capital.

Beyond Glasnevin in the north and Rathmines in the south lay the Cholera Belt and the Diphtheria Belt, the map tells us. You know, those old-time diseases caught by the destitute. Those funny old throwbacks to the Great Hunger. Har, har, har.

As it happened at the time there were people, children actually, contracting diphtheria in shocking outbreaks far down the country in the unseen confines of the many Mother and Baby Homes, often with 100 percent mortality rates for the affected children.

Satircal map of Ireland printed in the Dublin Opinion magazine, in 1941.

So perhaps there was a hint of unease in all that mocking laughter? Perhaps the contempt for the poor expressed in this satirical map was the reflex of some unspoken guilt? I don't see any mention of a Mother and Baby Homes on the map. No wonder.

I don’t see much sidesplitting humor in calling Northern Ireland “unexplored” either. It would have been much more accurate, if not quite as funny, to have called it “imaginatively and politically surrendered” by a craven class of shopkeepers who have feathered their own nests and want no trouble now thank you very much.

A nation once again? From this map it Dublin looks more like a sheep huddling in fear of what’s outside the herd.

May a true word was spoken in jest, the old saying goes. This jest is saying what was true then – that a small cabal had protected its interests and retreated into a golden circle – and what may still be true now.  Check out the comments.

Posted this map from Dublin Opinion, 1941 before. It's gas. pic.twitter.com/RYbE7JHCBR