Trans people speak about their experience growing up in Ireland

Did you know, Ireland is a world leader in trans inclusion? 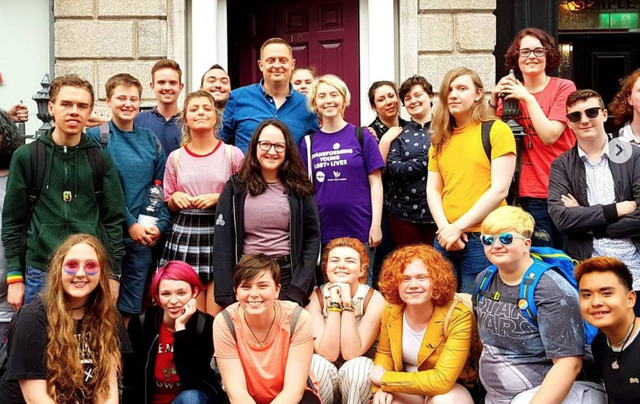 Did you know, Ireland is a world leader in trans inclusion?

So says Toryn Glavin, a 24-year-old transgender woman from Wexford.

Glavin cites the 2015 Gender Recognition Act, which provided an administrative process for transgender individuals over the age of 18 to achieve full legal recognition of their preferred gender, as a major triumph for transgender people in Ireland.

Cody Sweeney, who was assigned female at birth, confided in an aunt at age 16 that he didn’t feel comfortable in his female body and “felt like a boy.”

Sweeney told the Irish Times that his parents supported him right away. The Waterford-based teen was diagnosed with gender dysphoria and was placed on a waiting list for hormone treatment.

Sweeney, now 19, completed the legal process of gender recognition a year ago.

Sweeney’s mum, Karen, says: “I think what Cody did was a good idea, because he felt comfortable talking to his aunt. It doesn’t have to be a parent, it might be a good friend; just somebody to talk to, and keep the lines of communication open.”

Karen acknowledged the staff and students at his school for being very supportive.

“Irish people are great. And our society has changed so much over the decades. We didn’t have to make a big announcement. Word spreads in a place like Dunmore, where everybody would know our family. Cody’s on Facebook, and everybody else is on Facebook, so you don’t have to go around telling people,” she said.

Alison Farrell, who was assigned male at birth, is the eldest child in a family of six. As a child, Farrell enjoyed dressing up in princess costumes and pretending to have long hair.  She said her mum was "perfectly fine with it".

Ireland’s trans children: ‘I didn’t know what ‘trans’ meant. I just felt that I was a woman’ https://t.co/ofQMZzcpJX @BeLonG_To @TENI_Tweets

It was a Hallowe'en costume that caused the revelation that Farrell (above) wanted to be a woman. Having already come out as gay man as a 14-year-old, Farrell commended her grandmother for encouraging her to discover her true self, as she lived in a place where dressing up as a woman in public wouldn't have been accepted.

“She would let me dress up for an hour once a day in privacy. She didn’t want me walking around like that. Her fear was someone might attack me. I used to pack a bag and go to BeLong To. I’d get dressed for the time I was there, and then take it off to go home.”

When her family moved to a new town, Farrell embraced the change. Her school in Wexford allowed her to go by Alison on the school roll call and she now has a boyfriend and friends who are encouraging and accepting.

Ultimately she said she was lucky with her friends and family - although she is aware that many transgender people aren't in the same situation.

"If your family don’t accept you, you’ll find other people who will, friends who you can bond with, or be close with. You can choose your family.”

For some transgender individuals, the transition is not as easy, as Moninne Griffith, the executive director of organization BeLonG To, said "society hasn’t kept pace with legal acceptance."

In its report published last summer, the cross-party group recommended that the administrative process be extended to young people of all ages, subject to parental consent, which would “make Ireland the most progressive country in the world for trans equality”, as well as equality for non-binary and intersex people.

Today is #WorldTeachersDay & we want to say a big thank you to all of the #teachers who go above & beyond to support LGBT students & make school a safer place for them. It can make the world of difference #edchatie pic.twitter.com/eebc3evXDN

It is still really tough to be transgender in Ireland," Griffith said as she recalled accounts of rejection, isolation, bullying, stigma, and prejudice experienced by some.

She said the "first step" will be for the HSE to establish a trans clinic where young people can access counseling, gender dysphoria diagnosis, and medical care. On the other hand, Ireland also needs to "increase education, information and empathy, so that people understand this could be a child in their family or a friend. The reality is that being transgender is a normal part of the human existence."

Yippee! We have has been shortlisted for the Coca-Cola #ThankYouFund, BUT we need your help to be in with a chance of winning the €10,000 People's Choice Award! To vote for us, please follow the link, and select BeLonG To. https://t.co/Gz6obYKv7B pic.twitter.com/QGIeIQ6tGz

“We’re seeing a huge increase in the numbers of people coming out as transgender since the marriage equality referendum and the Gender Recognition Act, and that’s a really positive outcome. There’s been a 100 per cent increase in people accessing our youth groups and support services. We work with hundreds of trans people and we see that with the right support, they go on to live wonderfully fulfilled, happy and amazing lives," she said.