Legendary Irish manager Jack Charlton died on July 10 at the age of 85. 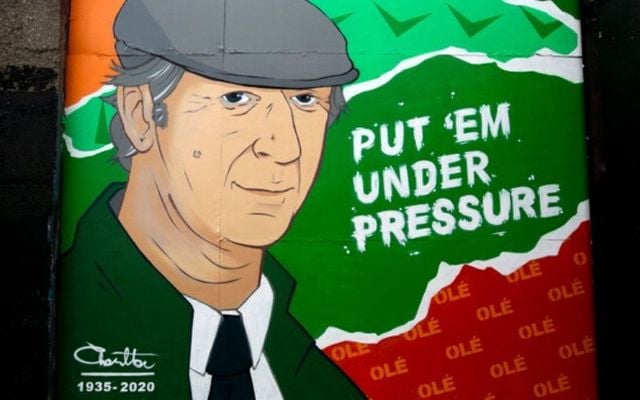 The mural was unveiled on Tuesday, July 14. Rolling News

Irish soccer club Bohemians have unveiled a touching mural in honor of former Ireland manager Jack Charlton, who died last week at the age of 85.

Bohemians unveiled the mural at Dalymount Park, their home stadium, on Tuesday, July 14.

The emotional mural, created by local artist Niall O'Lochlainn, features an illustration of Charlton alongside the caption "put 'em under pressure", a phrase that is synonymous with the Charlton era.

The song is one of the most well-known and beloved songs in Irish history and the song's famous chorus of "Ole Ole Ole" is still a staple at Irish international games.

That phrase also appears on the mural in another touching tribute to Charlton and his impact on Irish football.

An Englishman, Big Jack was appointed Ireland manager at a time when it was politically dangerous to do so, but he quickly won over the hearts of the nation and brought light to a dark time in Irish history.

Charlton was appointed at the height of the Troubles in Northern Ireland and, with tensions running high, he was greeted by a "Go Home Union Jack" banner during his first game at Landsdowne Road.

However, Charlton soon became an honorary Irishman and presided over the glory days of Irish football, including the victory against England in Stuttgart at Euro 88, the penalty shootout victory over Romania at Italia 90, and the famous win over Italy at the Giants Stadium in New York four years later.

He died on July 10 after battles with dementia and lymphoma.

A World Cup winner with England in 1966, both sides of the Irish Sea were united in grief following the death of the footballing legend.

Bohemians, therefore, commissioned the stunning mural at their North Dublin ground in honor of the fallen legend.

The League of Ireland club posted a picture of the mural on their Instagram account on Tuesday alongside the caption: "We’re delighted to unveil this very special mural to our collection at Dalymount Park where Jack played and managed. 💚🤍🧡‬

‪"RIP Jack, an Englishman who became an Irishman and brought joy to all corners of the island in darker days.‬"

We’re delighted to unveil this very special mural to our collection at Dalymount Park where Jack played and managed. 💚🤍🧡‬ ‪RIP Jack, an Englishman who became an Irishman and brought joy to all corners of the island in darker days.‬ ‪ ‬ ‪Mural local artist/sound head Niall O’Lochlainn. @niall.ol 👏🏻

Charlton will be laid to rest on Tuesday in Northumberland and a number of Irish supporters groups are planning an emotional send-off for the legendary manager.

You Boys in Green, the Confederation of Republic of Ireland Supporters Clubs and the Irish Supporters Network are all calling on Irish supporters to wear green on Tuesday and play "Put em under pressure" as a final goodbye to Charlton, while the Football Association of Ireland is calling on Irish radio stations to play the famous tune 12:30 p.m.

"Jack Charlton and his team put many smiles on many faces between 1986 and 1995, at two World Cup finals and a European Championship, and we should remember him with an Irish send-off next Tuesday," FAI President Gerry McAneney said.