Titanic sinking was not caused by iceberg, new documentary claims

A fire may have raged on the ship for as long as ten days before it set sail from Southampton on its fatal maiden voyage to New York. 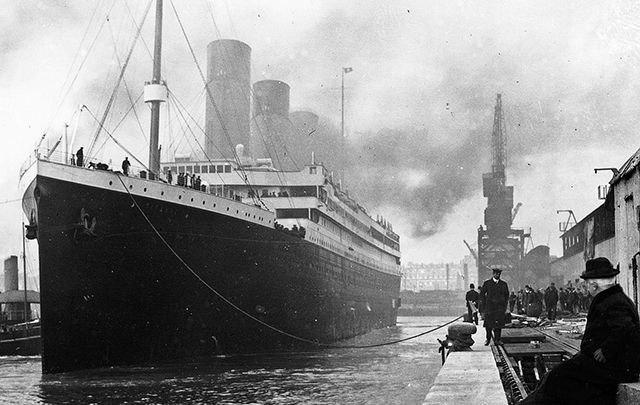 The Titanic still in the docks. Public Domain / WikiCommons

Think you know everything about the history of the Titanic and its tragic sinking in April 1912? Well, according to new evidence revealed by experts on New Year’s Day, we may have been wrong for decades as to the cause of the demise of the ship and the more than 1,500 people who lost their lives when she sank on her maiden voyage.

From books to Hollywood blockbusters, the tale of the Titanic hitting an iceberg while traveling at an inadvisable speed despite receiving iceberg warnings has been told many times. Until now it has always been accepted that the iceberg strike was so forceful that it pierced the ship's hull which eventually doomed liner, causing it to split in two and send it sink into the Atlantic Ocean.

However, according to experts featured on a new documentary which aired on British TV on New Year’s Day the actual cause of the tragedy may not have been the collision with the iceberg itself, but a previous fire that had weakened the metal of the hull, turning an otherwise innocent brush with some Atlantic ice into a fatal blow.

Irish journalist and Titanic expert Senan Molony revealed in “Titanic: The New Evidence” that, according to his analysis of photos of the ship before it had even left Belfast, the ship had been greatly weakened by fire and it was criminal negligence to have allowed it to sail.

"We are looking at the exact area where the iceberg struck, and we appear to have a weakness or damage to the hull in that specific place before she even left Belfast," he said, pointing to the presence of 30-foot long black marks on the hull – just behind where the iceberg hit.

"The official Titanic inquiry branded [the disaster] as an act of God. This isn’t a simple story of colliding with an iceberg and sinking,” he continued.

"Nobody has investigated these marks before. It totally changes the narrative. We have metallurgy experts telling us that when you get that level of temperature against steel it makes it brittle, and reduces its strength by up to 75 percent.

"The fire was known about, but it was played down. She should never have been put to sea."

The photos in question were taken by the Titanic’s chief electrical engineer before it left the Belfast shipyard and experts in the documentary subsequently confirmed they could have been caused by fire damage while David Hill, former secretary of the British Titanic Society, confirmed to The Times that there had indeed been a fire.

“There certainly was a fire,” he said.

“It set sail on Wednesday and they didn’t get it out until the Saturday, so it must have been a big one.

“Was it a life-changer? It’s my personal opinion that it didn’t make a difference”.

The fire is believed have been caused by the “self-heating” of hundred of tons of coal which caught fire in a three-storey-high fuel store behind boiler room six.

It is believed to have taken twelve men as much as three weeks to put it out but not before temperatures in this part of the ship raged between 500 and 1,000 degrees Celsius.

The Daily Telegraph reports that the ship's officers were under strict instruction from J Bruce Ismay – head of White Star Line, the company that owned the ship – not to inform any passengers of the fire. Some of those officers even claimed that the reason why the ship had been traveling so fast when it hit the iceberg was that the men working to put out the fire had been throwing the burning coal into the only place available to them: the ship’s furnace.

Read more: After the Titanic sank, the ship’s owner hid away in Ireland

This is not the first time that the Titanic fire theory has emerged, but the new evidence does give further weight to the argument. Back in 2008, Ray Boston, an expert with more than 20 years of research into the Titanic’s journey, claimed the fire may have started as the Titanic carried out speed trials, as much as ten days before it set off from Southampton.