Irishmen hope to prevent expedition company being granted permission to penetrate hull of the Titanic. 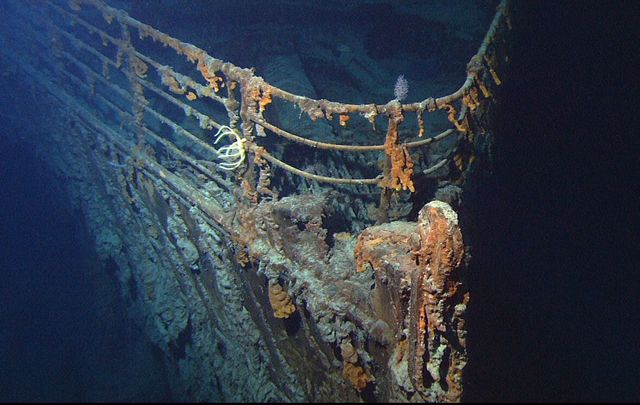 The bow of the RMS Titanic photographed in June 2004 by the ROV Hercules during an expedition. Public Domain / U.S. National Oceanic and Atmospheric Administration,

Michael Kingston and Ciarán McCarthy are intervening in a US court case that could grant a salvage company permission to enter the hull of the Titanic wreckage for the first time. They say the wreck should be considered a gravesite and that many Irish are buried there.

Irish maritime experts Michael Kingston and Ciarán McCarthy are attempting to intervene in a US court case that could grant a salvage company permission to enter the hull of the Titanic. The Irishmen are hoping to see the US extend the same respects to the Titanic as Ireland has to the Lusitania.

Michael Kingston, a native of Goleen in West Cork, is an international maritime expert who works as an International Maritime Organization Consultant and also serves as Vice Chairman of the Irish Cultural Centre in Hammersmith, London.

Michael Kingston at NYC's Pier 54, where the RMS Lusitania departed from in 1915.

On February 17, Kingston submitted a letter to Judge Rebecca Beach Smith, the senior judge at the US District Court for the Eastern District of Virginia, who is set to hear an application from the salvage company R.M.S Titanic, Inc ('RMST Inc') who seek permission to penetrate the hull of the R.M.S Titanic wreck for the first time ever in order to retrieve the Marconi wireless telegraph.

The case will be heard beginning this Friday, February 20.

In his letter, Kingston asks the Court to reject RMST Inc’s application on the basis that no proper consultation has taken place with Ireland’s ‘Interests as a Nation,’ particularly because of the need to consider the families of those who died, but also the ship’s other close connections with Ireland, particularly in Cork, the ship's last port of call, and Belfast, where it was built.

Kingston, who has worked behind the scenes on the international ‘Agreement for the protection of the wreck of the R.M.S Titanic’ which was recently ratified by the United States, has long argued that Ireland should accede to the Agreement in order to protect Irish interests.

In his letter to Judge Smith, Kingston cites Ireland’s preservation order on the R.M.S Lusitania, which prohibits any penetration of the wreck as it is a gravesite. He explains that 128 US citizens died in the R.M.S Lusitania disaster and that the community of Co Cork has since shown the US victims the deepest respect including through the dedication of his lecture on the sinking of the R.M.S Lusitania to the US citizens who died, which was delivered at United States Coastguard HQ in Washington D.C in the Centenary Anniversary Year (2015).

Kingston also delivered to the US Court a heartfelt letter by the children of Kinsale to the United States commiserating on their loss. The letter has been sent to the Court as an Exhibit. Kingston argues that the United States should reciprocate that respect and refuse RMST Inc’s application.

He concludes in saying that: “either the Court goes ahead with a hearing and adjudicates in favor of further consultation and inclusivity of the interests I cite in Ireland and the United Kingdom (and elsewhere), or, with respect for the cost consequences for RMST Inc, that the hearing is adjourned indefinitely until discussions have occurred, and Ireland as a Nation (and others) have had time to explain their interests and sensitivities properly, on behalf of their citizens and those who died."

Read More: Why do we care about the Titanic more than the Lusitania?

McCarthy said: “I am acutely aware of, and applaud, the behind-the-scenes work conducted by my friend and colleague, Michael Kingston, in relation to the wreck of the Titanic and have countersigned his letter to the US District Court opposing the plan outlined by US firm RMS Titanic Inc to salvage artifacts from the Titanic for the purpose of putting them on display.

“The Titanic disaster has maintained an indelible stain on the Irish consciousness in the more than a century since the ship’s launching in Belfast and the termination of its ill-fated maiden voyage in the North Atlantic on the 14th April 1912.

“It is a matter of intense concern that it is proposed that the hull of the wreck, essentially the grave of the over 1,500 souls, including the emigrants from Ireland who had boarded the ship in Queenstown in Cork on the 10th April 1912 in search of a new life in the United States, should be penetrated to facilitate the removal of relics.

“This proposal stands in stark contrast to the Irish government’s continuing commitment to the preservation order protecting the wreck of the Lusitania which sank three years later, while traveling in the opposite direction with its many US victims, and is in clear defiance of the recently ratified, ‘Agreement for the protection of the wreck of the R.M.S. Titanic.’

“The opening of a grave to recover items should be strenuously opposed in the absence of clear scientific or investigative motivation, as opposed to the ghoulish recovery of artifacts for commercial gain.”

In August 2019, EYOS Expeditions shared this footage from a visit to the Titanic site which showed "shocking" levels of deterioration: