Timothy Morales, 56, hid from Russian military patrols and secret police throughout the eight-month occupation of the city because he was afraid that his American nationality would make him a target. 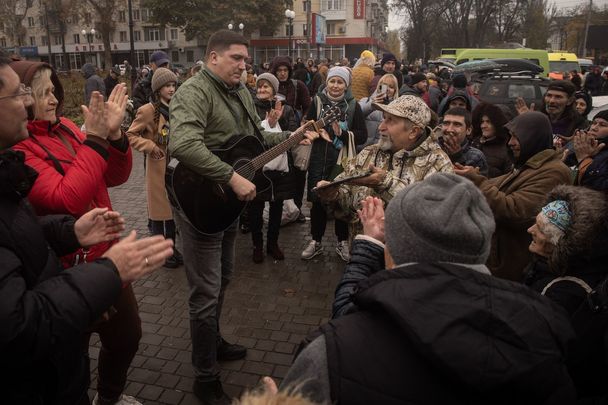 Citizens of Kherson, Ukraine, rejoice as the city emerges from eight months of Russian occupation. Getty

An American teacher living in the Ukrainian city of Kherson told invading Russian soldiers that he was Irish in order to avoid persecution and possibly save his life.

Timothy Morales, 56, hid from Russian military patrols and secret police throughout the eight-month occupation of the city because he was afraid that his American nationality would make him a target.

He found himself trapped behind enemy lines after Russian forces took the city in the early days of the invasion with no means of escape.

Morales told the New York Times that he made one bid for freedom but turned back when he saw tanks firing on the road ahead of him.

He added that he didn't want to risk going through a Russian checkpoint with an American passport because the Kremlin had turned the USA into Russia's real enemy in the war. He feared that he would be detained simply because he was an American.

Having ensured that his 10-year-old daughter had fled the city with his ex-wife, Morales contented himself with keeping off the streets in Kherson as soldiers and officers with the Federal Security Service moved through the city in search of a pro-Ukrainian underground guerilla movement.

Morales spent the vast majority of the last eight months indoors, watching movies on his laptops and spending sunny afternoons in the walled courtyard of his apartment building.

His ex-wife's relatives brought him food and supplies and he sometimes risked a venture to the local grocery store, where he trusted staff would not reveal his pro-Ukrainian leanings to the Russian troops.

In September, however, Morales stepped into the courtyard and spotted a Russian soldier pointing a rifle through a mesh wire in a gate.

He ran back inside, but a search party soon arrived at his door, including officers from the Federal Security Service.

Faced with revealing his true nationality, Morales told the officer that he was an Irishman named Timothy Joseph who had lost his passport. An elderly neighbor helped him pull off the lie, informing the officer that he had no reason to suspect the American.

Morales told the New York Times that the incident changed his perspective about the invasion, making him "paranoid". He said he had only gotten away with it because the search party "weren't the cleverest people in the world".

He soon fled to another apartment in case the secret police returned for another search.

He said he was able to resume teaching English online while in hiding, which helped keep him "sane" during the eight-month occupation.

However, several months into the occupation, Morales said he began to notice discipline breaking down amongst the Russian troops.

"Over time, they got scruffier and more hodgepodge," he told the New York Times.

In the last month of the occupation, he said he noticed soldiers had stolen expensive cars and taken them out of the city by barge as if to remove them from the frontline, which gave residents hope.

One week before the city was liberated, Morales was cut off from news after the electricity went out. Last Friday, however, he noticed a car driving by with a Ukrainian flag flying from its antenna and knew that the Russians had left.

He joined celebrations in the city's central square last Friday and greeted Ukrainian soldiers as they entered the city without a fight but said he now plans to leave the city.

"I need to put some space between myself and what happened here," he told the New York Times.

Zelenskyy tells Irish students to "take care" of their freedom