Speaker Rachel Ní Faoláin told the rally that Irish society had descended into a "dictatorship, a totalitarian dystopia" since the outbreak of the pandemic last year. 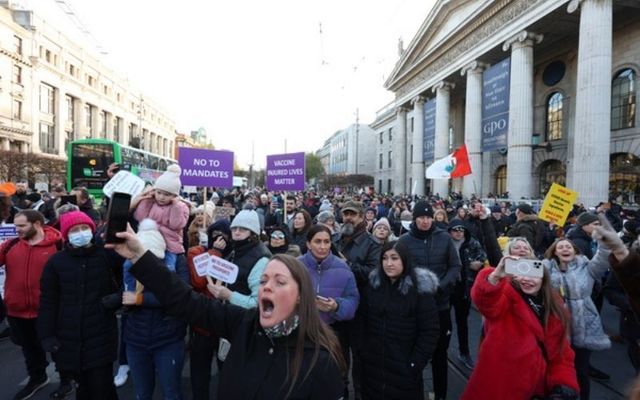 Thousands of anti-lockdown demonstrators took to the streets of Dublin on Saturday afternoon to protest against Ireland's vaccine passports and other public health measures.

The protesters marched from Parnell Square to D'Olier Street before turning onto Westmoreland Street and marching to the General Post Office, where they held a rally.

Rachel Ní Faoláin addressed the march for "Truth and Civil Rights" and said that unvaccinated people posed no greater risk to public health than those who had been fully vaccinated against COVID-19.

Speaking from beside the Spire, Ní Faoláin told the crowd that Irish society had descended into a "dictatorship, a totalitarian dystopia" since the outbreak of the pandemic last year.

She said that she was opposed to vaccine passports and added that discrimination against a "new minority" was now encouraged in Ireland.

"It has become intolerant... hate speech towards unvaccinated people has become the norm and is now rising exponentially," Ní Faoláin told the crowd on Saturday, adding that people were being coerced to take the vaccine.

She also criticized the Irish media for their coverage of the pandemic and the Government's public health measures.

Ní Faoláin's speech was greeted by large cheers from the thousands of demonstrators who attended Saturday's protest.

The Irish Times reports that the march at one point stretched from the GPO to the Gate Theatre, a distance equal to roughly half the length of O'Connell Street.

Robert Mahony, a demonstrator who attended the protest, told the publication that he was protesting against the segregation of society into vaccinated and unvaccinated.

"I’m also here because I have young children and the recent comments from Nphet about masking children, from nine upwards, I find that abhorrent," he said.