Thousands of demonstators called for the Israeli Ambassador to Ireland to expelled amid rising tensions and violence between Israel and Palestine. 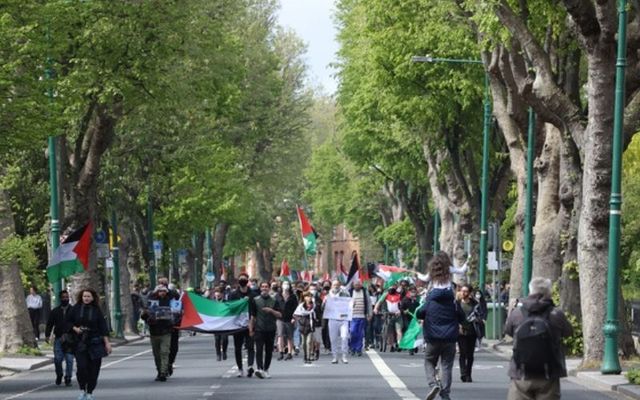 Demonstators march toward the Israeli Embassy in Ballsbridge. Rolling News

Thousands of demonstrators gathered at the Israeli Embassy in Dublin on Saturday to stand in solidarity with the people of Palestine amid rising tensions and conflict in Gaza.

The protest began at the Spire on O'Connell Street and moved through Dublin City Center to Ballsbridge, where the Israeli Embassy is located on Pembroke Road.

The crowd chanted "Free Palestine" during the march and called for Ireland to boycott Israeli goods. Others called for the Israeli Ambassador to Ireland to be expelled.

The crowd swelled as it neared the Israeli Embassy and there was a small garda presence at the march, although no arrests were made. A Garda spokesperson said that demonstrators dispersed peacefully when the march reached its conclusion and reported no injuries.

However, the Journal reports that gardaí will be investigating the organizers of the protest, which breached Ireland's current public health restrictions since it was an outdoor gathering of more than 15 people.

Several People Before Profit TDs attended the rally, including party leader Richard Boyd Barrett, who has frequently spoken out against Israeli aggression toward Palestine.

Boyd Barrett told the Irish Times that the large turnout at the rally demonstrated "an enormous show of support" for Palestine and said that it showcased how Irish people were "horrified at what Israel is doing".

He said that it was "understandable" that people wanted to protest in spite of Ireland's lockdown restrictions.

"When children are being killed... People’s feelings overwhelm them, so I can understand that," he told the Irish Times.

Boyd Barrett said that demonstrators wore masks and that organizers "went out of their way to encourage people to wear masks and stay compliant".

Meanwhile, several similar demonstations took place in Cork, Galway, and Belfast on Saturday, while thousands of demonstrators gathered in London to stand in solidarity with the people of Palestine amid the ongoing conflict with Israel.