Thelma and Michael Dennany, who were killed in a car fire in Co Westmeath, are now "exploring the highways and byways of heaven," the funeral heard. 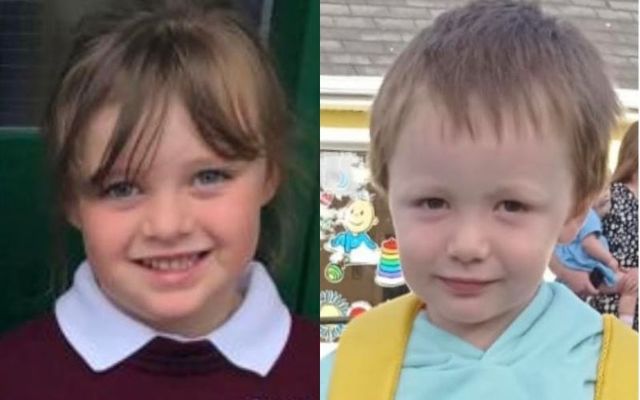 Thelma, 5, and Michael, 2, who died after a car fire in Co Westmeath on September 9, were mourned by hundreds in St Mel's Cathedral in Co Longford on Thursday.

The young siblings were "inseparable in life" and are now "exploring the highways and byways of heaven" together, the congreation heard.

Father Sean Casey told the congregation "we do not know what happened on that lonely road, but we know the children were loved".

Speaking about Thelma and Michael's friends, Fr. Casey said "We have a special place in our hearts for Thelma and Mikey’s young friends in preschool in Rathowen, and in St Cremin’s national school in Multyfarnham and for the friends of Eddie and Katelyn, students in Wilson’s Hospital School."

Symbols of Thelma’s and Michael’s life were brought to the altar including artwork by Mikey from where he attended pre-school at Toddlers and Waddlers, in Rathowen. Joan Hickson, Thelma’s teacher brought some artwork and a collage to the altar. Their aunt Aline Fitzgerald and uncle John Dennany brought fishing rods belonging to the siblings.

Thelma and Michael were buried together in a white double coffin.

The deaths of Thelma and Michael Dennany

Thelma and Michael Dennany and their mother, Lynn Egar, were in a parked car on a rural road in Lacken, Multyfarnham, Co Westmeath, when it was engulfed in flames on Friday, September 9.

The trio was pulled by from the car by a passerby. Thelma and Michael were pronounced dead, while Egar was hospitalized with injuries.

An Garda Síochána said on September 12 that they were conducting a criminal investigation into the incident.

A funeral notice on Rip.ie read: “Mikey and Thelma Dennany, unexpectedly. Pre-deceased by their grandfather Austin Dennany and by their grandmother Thelma Egar.

“Safe in the arms of the Angels."

While Irish police continue to build a case it is believed that the children's deaths will be upgraded to a double murder inquiry.

Speaking to the Irish Independent, Fr John O’Brien, of Multyfarnham Franciscan Abbey, said “I can’t find the words, but just sitting with someone and listening to how they feel and their confusion, in that way we create a healing spirit between us,” he said.

“We have to do that and do it for each other in the community. We are in shock, it is simply unbelievable.

“We don’t have a magic wand to take away the tears, we have to sit and be with somebody. It is a lonely time for everybody.

“It has been a tremendous shock.”