For the second time in three days, hundreds of skateboards protested outside the famous Temple Bar pub in Dublin after two teen skateboarders were allegedly assaulted by pub security. 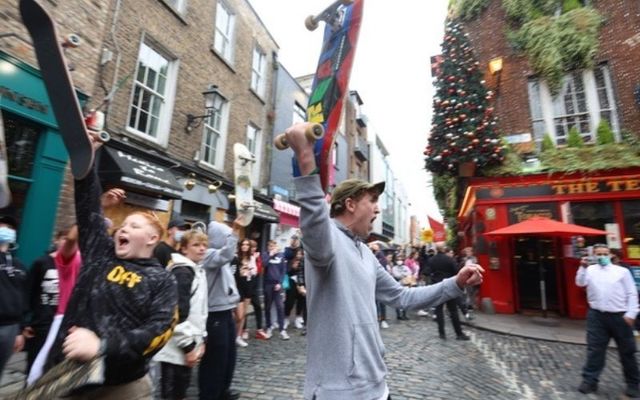 Protestors raise their skateboards outside the Temple Bar pub in Dublin. Rolling News

Hundreds of skateboarders staged a second protest outside a famous Temple Bar establishment following an alleged assault on two teen skateboarders outside the venue on Monday night.

The protestors gathered outside the Temple Bar pub on Saturday, banging skateboards against the cobbled street and calling on pub management to "come out and say sorry". They also booed and jeered patrons who entered the pub during the protest.

A similar protest took place outside the same venue on Thursday evening.

The alleged assault took place outside the Temple Bar pub on Monday night, with several eye-witnesses claiming that two teenage skateboarders were assaulted by at least four security guards working at the pub.

Footage circulated on social media appears to show the two teenagers, who are aged 13 and 16, being kicked, punched, and dragged through the street.

Evan Fogarty, who organized both protests, told the Irish Times that demonstrators are "still a bit shook" by Monday night's incident.

"We just want them to come out and apologise, to explain themselves," he told the Irish Times at Saturday's protest.

Fogarty also addressed the crowd on Saturday and said that the two teen skateboarders had done nothing wrong.

"These kids don’t cause any trouble. All they want to do is get something positive to do. We get no light shed on skateboarding in this country, that’s why we’re standing here. None of us are scumbags," he told the crowd.

Fogarty previously criticized the Temple Bar pub on Instagram over the incident and accused the security staff of dragging one of the teenagers inside the pub and assaulting him.

"It’s one thing hitting a Child but Kicking them while they're on the ground before dragging them into the pub for a hiding," Fogarty wrote on Instagram.

Gardaí have confirmed that they are conducting inquiries into the incident.