Irish airline Ryanair is facing harsh criticism after failing to remove a passenger who launched a tirade of racial abuse at an elderly black woman. 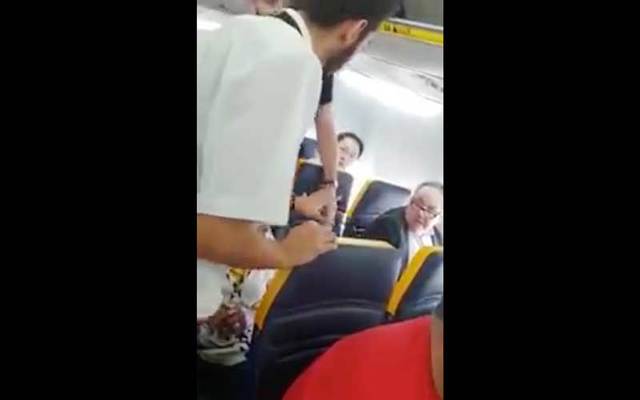 Caught on video: A Ryanair passenger launches a tirade of racial abuse towards an elderly black woman and was not removed from the flight. Facebook/David Lawrence

Irish airline Ryanair is facing harsh criticism after failing to remove a passenger who launched a tirade of racial abuse at an elderly black woman.

In a video recorded by a fellow passenger and posted on Facebook, a man can be heard calling the woman “ugly black bastard” and threatening to push her as passengers boarded a flight from Barcelona to Stanstead on Friday.

The man shouts: "Don't talk to me in a foreign language, you stupid ugly cow."

The row allegedly broke out after the elderly woman was unable to move out of her seat quickly enough so the man could get to his window seat.

Read More: Ryanair apologize to crew who slept on airport floor in Spain

According to the woman’s daughter, who was sitting in another row, her mother 77, has arthritis and took a while to move out of the way for the man to get to seat.

David Lawrence, who filmed the video, told the BBC: "Everything was calm, we were getting ready to take off. And then a man came on board and arrived at his seat, then spoke very harshly to a woman sitting in the aisle seat.

"That was what got my attention as it was very loud and very aggressive. He started to shout at the woman, saying 'get out of the way', 'move your feet', 'you shouldn't be sitting here,’”

He said when the woman’s daughter arrived “an argument started.”

This racist white man refused to sit next to an elderly black woman on a Ryanair flight.

"He pushed past the woman and went to his seat," he said.

The man then launched into his racist tirade, which Lawrence described as the "most disgusting exchange of racial slurs and foul language.”

One man, who has been praised for his actions, intervened and can be seen in the video telling the shouting man to stop.

A Ryanair attendant finally comes up and tells the irate man:"Don't be so rude, you have to calm down."

He then tells the shouting man he is going to refer the incident to his supervisor, to which the man answers: "I'm alright."

The elderly woman tells the attendant she wants to sit with her daughter and tells the man he “stinks.” She says of the passenger “Kick him out.”

"I am so shocked," said Lawrence.””There was no response [from most other passengers]. No-one said anything. The young man who actually intervened... he was compelled to step forward."

Lawrence said it was a "horrible, horrible situation" and he was "shocked" the airline "allowed something like this just to go unchecked.”

Ryanair is facing backlash for not having the man removed from the flight.

Ryanair released a statement, saying: "We operate strict guidelines for disruptive passengers and we will not tolerate unruly behaviour like this.

"We will be taking this matter further and disruptive or abusive behaviour like this will result in passengers being banned from travel."