Two RAF jets were scrambled to escort the Ryanair flight after a bomb threat was reported on board. 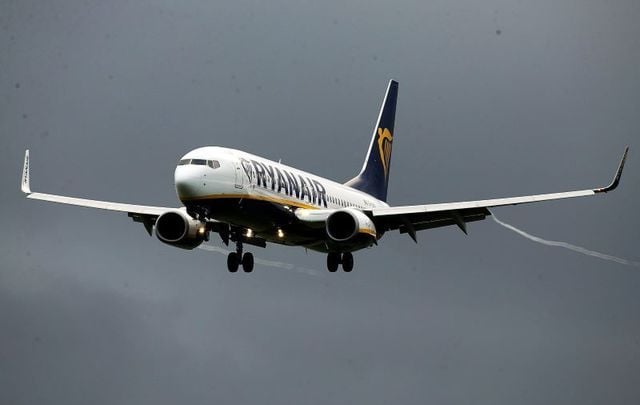 A Krakow - Dublin Ryanair flight was diverted on Monday after a bomb threat was discovered on board. RollingNews.ie

A Ryanair flight from Krakow to Dublin was diverted to Stansted Airport in the UK on Monday after pilots reported that a note about a bomb was discovered in the plane's bathroom.

In a statement, Ryanair said: "A Ryanair flight from Kraków to Dublin this evening (13 JUL) discovered a note in one of the toilets claiming that there were explosives on board.

"The captain followed procedure by alerting the UK authorities and diverted to the nearest airport (Stansted) where the plane landed normally, but was taxied to a remote stand where passengers disembarked safely.

"The aircraft and passengers are being checked by the UK police who will decide when they may travel onwards to Dublin on a spare aircraft. Passengers in Dublin waiting to depart to Kraków are being transferred to a spare aircraft to minimise any delay to their flight.

"Ryanair apologises sincerely for the delay and inconvenience caused to those affected by this diversion."

On Twitter, Andy Kirby shared these videos of the two Royal Air Force (RAF) typhoons that were scrambled to respond to the incident just before 7 pm local time:

This is from the camera... pic.twitter.com/AWtNbQskGz

Essex Police later said that all the passengers on the plane had safely disembarked:

We have now safely brought off all the passengers from the plane.

The plane remains in an isolated area at Stansted and our enquiries are ongoing. https://t.co/CvwobFs6HA

It remains unclear whether or not explosives were discovered on board.