John Conor Kennedy charged with disorderly conduct after punching a man outside an Aspen club. He claims the man called his friend a homophobic slur. 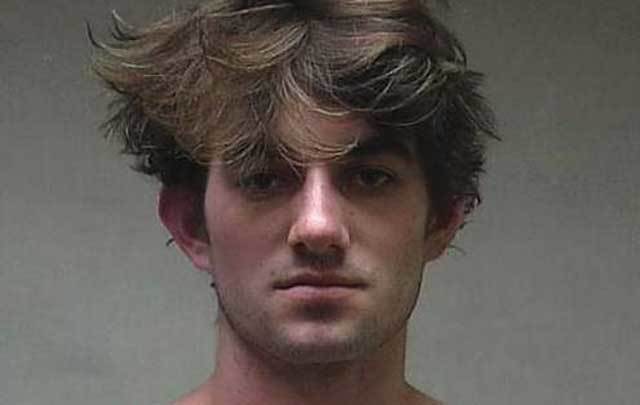 John Conor Kennedy, 22, was arrested and charged with disorderly conduct after getting into a fight and resisting arrest outside an Aspen club on Dec. 29. Pitkin County Jail

Robert Kennedy, Jr. has said he is “happy” that his son John Conor Kennedy was arrested after getting into a bar brawl last week because he was taking a stand against bullying.

The 22-year-old was arrested and charged with disorderly conduct in the early morning hours on Thursday, December 29, after punching a man outside an exclusive club in Aspen, Colorado. Conor has claimed that he hit the man after he called his friend a homophobic slur.

“Conor has always reacted against bullying. I’m happy he stood up for his friend,” said Robert Kennedy Jr.

He told the Aspen Times that his son had asked a group of four meant to apologize to his friend for calling him the slur about an hour before the brawl broke out outside the Bootsy Bellows nightclub.

One of the men came over and apologized at that point, but about an hour later when the crowd began exiting the club, two of the men began using homophobic slurs against Conor’s friend again.

Kennedy J said that after his son told them again to stop, one of the men took a swing at Conor and the fight broke out.

“I’m very sorry it turned into a police incident,” he said. “(Conor’s) not liking the attention.”

“We are aware of some of those allegations and we are following up on them this evening,” he said Thursday night. “At the moment, there have been no allegations of additional crimes given by witnesses or those involved in the incident.”

Aspen police Sgt. Rick Magnuson told the Aspen Times that police officers were called to the scene about 1:40 am to help with patrons who wouldn’t leave the bar.

Officer Andy Atkinson was outside in front of the club when he saw a fight break out between two men across the street.

Atkinson reported seeing Conor grab another man by his shirt, pull him down, and hit him four or five times in the back of the head with his fists, Magnuson said.

Officers attempted to break up the fight but Conor, who was listed in the affidavit as 6-foot-3-inches and 200 pounds, continued to try to attack the man, which prompted Atkinson to restrain him.

“Kennedy and I fell back onto the snow bank on the south side of (Hyman Avenue) where Kennedy attempted to pull away from me and stand up,” Atkinson wrote in his report. “I held onto Kennedy’s arms and rolled him over with assistance from a bystander on to his stomach.”

Conor Kennedy apologized to Atkinson after he was arrested.

“Kennedy then said, ‘He called my friend the F-word,’” according to the report.

Conor was charged with disorderly conduct, taken to Pitkin County Jail, released without bond and issued with a summons to appear in Aspen Municipal Court on February 22.

A family spokesperson said of the incident: “Multiple witnesses to the incident have reported that two men assaulted Conor Kennedy after he rebuked them for directing a homophobic slur and threats to his close friend.

“They also report that Mr. Kennedy was cooperative, compliant and respectful towards the police from the moment they arrived on the scene.

“Mr. Kennedy looks forward to a full airing of the incident.”

Conor, a history and literature major currently in his third year at Harvard University, is the grandson of Ethel and Robert F. Kennedy and the oldest son of Robert Jr. and his second wife, the late Mary Richardson. He made headlines when he briefly dated pop star Taylor Swift in 2012 when he was 18.