Smaller importers are still bringing authentic Cadbury’s to the US, much to the joy of the Irish and British. 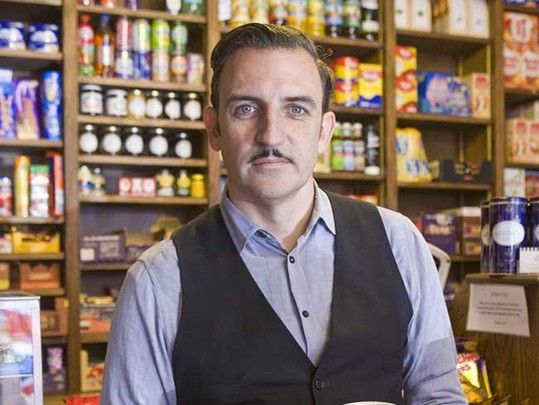 Sean Kavanagh-Dowsett, the co-proprietor with Nicky Perry of Tea and Sympathy, in the West Village in New York. Smaller importers are still bringing authentic Cadbury’s to the US. Zandy Mangold

At the start of 2015, it looked as though we had a chocapocalypse on our hands.

The American chocolate company Hershey’s, which has held the right to produce the American version of Cadbury’s, the beloved British brand of chocolate, in the US since 1988, won a legal judgment against Posh-Nosh, one of two main companies that had been importing the authentic, British-made Cadbury’s into America. Shortly after, the other key Cadbury importer, Let’s Buy British, agreed that they would also stop supplying shops in the US with the real-deal Dairy Milk bars, Crème Eggs, Chocolate Roses and Flake bars.

The Irish and British communities here – who believe Hershey’s version of their favorite nostalgic indulgence to be far, far inferior (“tastes like gasoline,” an IrishCentral article at the time noted) – were outraged and devastated, with many declaring it to be a full on chocolate war.

Letters of protest were written, Twitter exploded with angry posts, and petitions against Hershey’s monopoly on the US market racked up thousands of signatures.

Slowly the furor seemed to dim, and except for one British couple who got a stern finger-wagging in March from the Hershey’s PR rep for attempting to start a personalized monthly Cadbury’s delivery service, not much was heard of the story again.

The American bars also use emulsifying additives such as soy lecithin and PGPR, an ingredient made from castor beans which is used to replace raw cocoa butter. British bars use vegetable fats and different emulsifiers.

In a previous interview with IrishCentral’s sister publication the Irish Voice, Sean Kavanagh-Dowsett, co-proprieter of the parlor and import shop Tea and Sympathy in New York's Greenwich Village, explained that for his business “U.K. and Irish chocolate are a largish percentage of our business. It has an impact on us and a very unfair one. It's not as though we are trying to pretend the product we're bringing in is the American Cadbury's.

“I'm thinking us bringing in a few chocolate bars can't be impacting their business that much,” he added. “I understand they own a trademark or a license to manufacture something brown and waxy that they then call Cadbury's in this country. But I'm not interested in selling their product. If their product was any good I'd be delighted to sell it, but it's not so I won't.”

As it turns out, he didn’t have to. Fortunately, many of the smaller British and Irish import shops that had feared for the worst have been enjoying the sweet taste of authentic Cadbury’s victory.

Vanity Fair recently caught up with Nicola Perry, co-owner of Tea & Sympathy. Perry, who goes by Nicky, was one of the leading voices in the campaign against Hershey’s.

Perry was pleased to report that her shelves remain stocked with authentic Cadbury’s chocolate, thanks to the smaller importing companies not affected by Hershey’s legal dealings with Posh-Nosh and Let’s Buy British.

“My whole thing now is, when people ask, I say, ‘I fought Hersheys and I won!” she exclaimed.

After news emerged of the chocolate war, she initially began hoarding as much of the British Cadbury’s as she could. But it turned out that there are still about a dozen smaller importing companies, some of them operating under the radar, through whom she can still keep her customers happy (understandably she did not disclose the names of the companies).

For those of us who don’t live nearby an import shop and just want the good Cadbury’s for personal enjoyment, there are still a number of British vendors on Amazon who ship the real-deal chocolate to the US.

The day may come when Hershey’s will decide to crack down on the smaller importing enterprises, though Perry also noted that the Cadbury’s outrage seems to have taken a toll on Hershey’s public approval and stock rating, with their shares plummeting by 14% in the months after news broke of their move to block Cadbury’s.

Have you still been able to purchase the authentic Cadbury’s chocolate? What do you think of the substitute Hershey’s produces? Share your thoughts in the comment section, below.