Rare photo of Titanic on auction today could fetch thousands

105 years after the ill-fated ship sank, the Titanic still has a grip on the popular imagination like few other events, with auction items getting high bids. 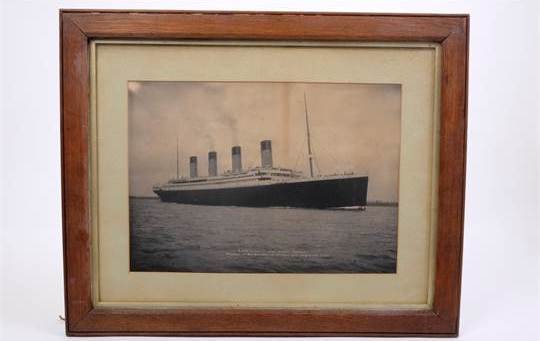 105 years after the ill fated ship sank, the Titanic still has a grip on the popular imagination like few other events, with auction items getting high bids. TheSaleroom

A picture of the ill-fated Titanic is set to be auctioned today in in Colchester, England. The black and white image of the ship they said was unsinkable was taken in Southampton, England where the ship docked just prior to her doomed maiden voyage.

A mere month after the ship sank the owner of the photograph, Gertrude Pratt, put the item up for sale in her bookstore – a fact confirmed by the inscription on the back side of the picture which reads: ‘G.A.Pratt, Bookseller-Stationer, Oxford Street, Southampton 7 May, 1912.’

Auctioneer Daniel Wright told the Daily Echo, “The photograph was purchased by an eagle-eyed collector at a regional auction.

"It was simply catalogued and bought for a song. Titanic memorabilia continues to be keenly contested at auction and this photograph, which was sold just after the disaster, is a poignant document of the time.

"We are increasingly seeing more lots sold to on-line bidders and with significant international interest in the Titanic we might anticipate online competition for the lot on the day of the sale.”

It’s been conservatively estimated that the photo will fetch between $250 and $375 when the item is auctioned at today at  Reeman Dansie in the town of Colchester.

However, it’s possible that the item will sell for far more as a photo described as “comparable” was sold in London 19 years ago for the princely sum of $2,300.

That was only one year after the release of the Hollywood blockbuster "Titanic," but in the 105th year since the sinking, the story of the doomed ship on its maiden voyage still has a grip on the popular imagination in a way that no other disaster has ever come close to rivaling.

As recently as 2015 a biscuit given to a passenger on one of the ship’s lifeboats sold for $18,800 at an auction in Wiltshire in England and a photo that purported to show the deadly iceberg that sank the ship sold at the same auction for $26,300.

A biscuit that survived the sinking of the Titanic has sold for £15,000 at auction, worlds most expensive biscuit. pic.twitter.com/Lp3e3jDDqq

You can view the photo's auction page here.