President Michael D. Higgins visited Creeslough in Donegal before Christmas to pay his respects to the community that lost ten people in a tragic gas station disaster last October. 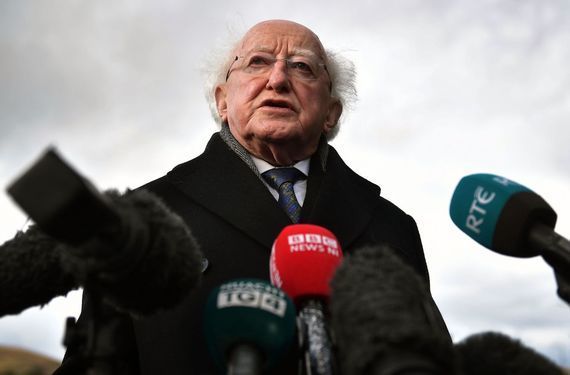 President of Ireland Michael D. Higgins paid a surprise pre-Christmas visit to Creeslough where the 400 population is still recovering from the tragedy of 10 deaths in a gas station disaster last October.

President Higgins was greeted by Christmas decorations that villagers managed to erect a couple of weeks ago despite their agony. Among the decorations Higgins passed in the Co. Donegal village were a couple of Christmas wreaths left in wooden hoarding around the site of the disaster. Across the street is a shrine of flowers and on Main Street is a display cabinet with 10 lit candles for each of those who died and another candle for those who were injured. The candles are where the Christmas crib would normally be.

Higgins was making his second visit – his first was in the days immediately after the tragedy – and he traveled the extra distance after attending the burial on Thursday of 23-year-old hero soldier Sean Rooney who died on a peacekeeping mission in south Lebanon the previous week. Local Creeslough parish priest Father John Joe Duffy thanked President Higgins for his latest visit to the community. 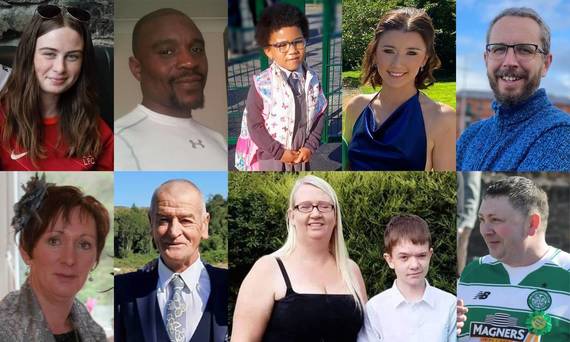 In a statement on Saturday Duffy said, “President Higgins expressed his heartfelt desire that I let the families whose loved ones died in the tragedy at Creeslough, the injured, the Creeslough community and all who are affected by the tragedy of October 7, 2022, know that they all are in his thoughts and will continue to be over these days in a particular way.”

The priest added, “All are in his thoughts and you can see that the President is carrying us all in his heart... Our President not only came to visit us but stayed with us during the funerals of eight of the people, of which three were children and all so young, some just starting out on the journey of life.

“Our President walked with us in solidarity, and carried us with his compassion and empathy and President Higgins continues to be here for us all just as he was in that week of October as a kindly empathetic father figure who desires to accompany us on our journey through these days, weeks, months and years that lie ahead.”

On October 7, a blast destroyed an Applegreen service station in Creeslough and caused a section of an adjacent apartment block to collapse. Ten people were killed, including two teenagers and a young girl. Creeslough is the village where Bridie Gallagher, Ireland’s first international pop star, was born in 1924. She became known as “the girl from Donegal” and made Irish songs famous worldwide.

Local community editor Marie Duffy told the BBC recently, “People still do not have the words to describe what has happened to our town. Unfortunately, Creeslough will be forever associated with this explosion. “That has been very hard for a lot of us to come to terms with because we were so used to being an anonymous town nobody really knew.”

She said turning the Christmas lights on was a very important step, because the town had to celebrate Christmas in some small way in order to get to the next grieving process.

Over the next nine months, the villagers in Creeslough, and neighbors in surrounding areas, will continue to mark a number of firsts, inevitably including the inquest into the tragic explosion and the one-year anniversary.  A few days before Christmas Creeslough Community Association noted on Facebook that fundraising efforts still continue for the village and those affected by the tragedy.

The website recorded that Christin Ní Ghallachoir, formerly of nearby Gortahork and now residing in New York, raised over €10,000 for the fund which she handed over to community members Ann Laight, Bernadette McFadden and Mairead McGinley, beneath a sign of the late Bridie Gallagher welcoming visitors to Creeslough. The fund has so far raised an estimated €1.25 million.